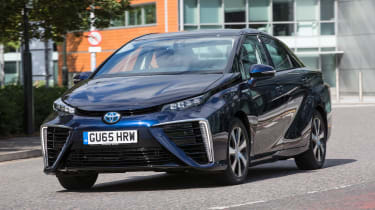 Toyota has said it will recall all 2,800 of its hydrogen fuel cell vehicle Mirai cars, built between November 2014 and December 2016, after it found potential issues with the output voltage generated in the fuel cell system.

The company's first ever hydrogen vehicle recall will involve a software update to the fuel cell and is expected to take around half an hour. It will be free of charge.

With just 13 hydrogen fuelling stations in the UK, some purely reserved for research purposes and not for commercial use, hydrogen car uptake has been slow. Toyota UK said just 28 Mirais are registered in this country, but couldn't confirm if all 28 are included in the recall, as some may already have had the software tweak done prior to registration this year.

Under unique driving conditions, such as depressing the accelerator pedal to the wide open throttle position while driving with cruise control on during a long descent, the voltage generated by the fuel cell boost converter may exceed the system's maximum limits, Toyota has said.

Since introducing the £66,000 hydrogen car, Toyota has sold around 2,800 in Japan, the US, Europe and the Middle East.

Would you buy a hydrogen car? Tell us in the comments below... 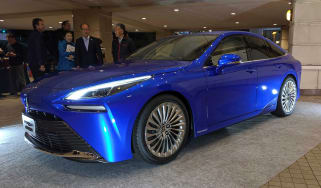 Toyota has previewed its new hydrogen-electric powered Mirai saloon at this year’s Tokyo Motor Show, ahead of its launch in 2020
Killer drivers will face life sentences from 2021