Toyota will present a track-only version of the new Supra at this year’s Geneva Motor Show, developed specifically for GT4 racing 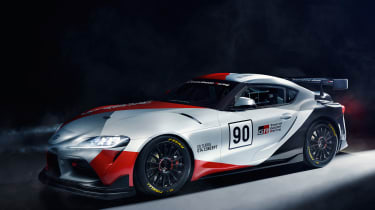 Revisions to the Supra GT4 concept’s body include a specially-designed diffuser and rear wing. Both items are constructed from renewable natural fibre composites, such as hemp and flax rather than traditional carbon weave, reducing the car’s environmental impact. The GT4 concept is also lower and longer than the road-going Supra.

Chassis upgrades adhere to the GT4 rule book: that means the car sits on a set of lightweight 18-inch alloys wrapped in Pirelli P Zero racing slick tyres, Brembo brakes, stiffer springs, uprated dampers and performance anti-roll bars. The interior has been gutted to save weight and, to assist with structural rigidity and crash safety, an FIA-approved roll-cage has been fitted.

The Supra GT4 concept is powered by the same turbocharged 3.0-litre straight-six as the road-going Supra, albeit with a race-spec ECU and bespoke wiring loom. Performance figures are yet to be announced. The engine feeds its power to the rear wheels, through a limited-slip differential, via an automatic transmission.

Other upgrades over the road car include a motorsport-specific fuel tank, stronger drive shafts, a fast-refuelling system, an FIA-approved fire extinguisher and an OMP racing seat.

The GT4 racing programme was established in 2006, designed as a more accessible endurance racing series for both professional and amateur racers. Toyota plans to use the Geneva Motor Show to gauge customer interest, before deciding on whether or not to sell the car for competition.

Now read our review of the Toyota Supra's sister car, the BMW Z4. Let us know your thoughts in the comments section below…