Can the all-new BMW Z4 roadster offer Porsche 718 Boxster thrills? We find out…

Be in no doubt: the latest BMW Z4 makes a huge leap forward dynamically over its ageing predecessor. It’s better built and loaded with more equipment, too. However, against such strong competition, it doesn’t quite hit the spot. Too heavy to feel as fun as a Porsche 718 Boxster or an Alpine A110, the Z4 lacks the excitement or emotion that’s really crucial in this segment

This is the new Z4, and its maker claims it’s the first incarnation to offer genuine driver appeal. That’s right: unlike the previous laid-back iterations, this is a car that BMW reckons will offer thrills to beat the Porsche 718 Boxster S.

Yet it’s not quite as straightforward as that, because this sector already offers plenty of choice. While BMW might have singled out Porsche as a benchmark, more focused drivers can look at the fixed-roof Alpine A110, too. If your preference is for top-down cruising, is an Audi TT Roadster a better bet? 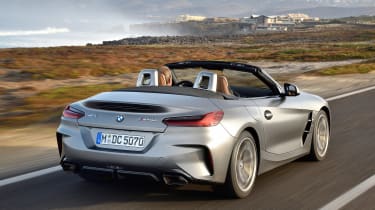 Predictably, the smaller units are cheaper to run. Based on the same 2.0-litre petrol, both the 20i and 30i are claimed to return 46.3mpg and emit 139g/km of CO2. The six-cylinder M40i’s extra punch means efficiency takes a hit, although a claimed 38.1mpg is nearly identical to that of the Boxster S.

The new Z4’s drawn-out gestation ran in tandem with Toyota’s revival of the Supra name for its interpretation of the two-door sports car. However, there are actually very few components shared between the two; the BMW-sourced engine and ZF automatic gearbox populate a fairly short list.

The Z4’s chassis is all new. There’s extensive use of aluminium in the suspension (which features standard adaptive dampers in the M40i), and an electronic differential to aid traction out of tight turns. The 2,470mm wheelbase is 25mm shorter than the outgoing car’s and 5mm less than the Boxster’s. 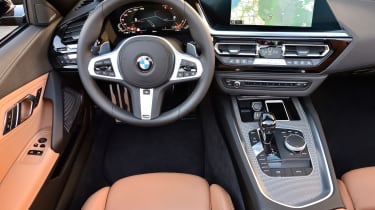 As you’d expect from a BMW, the Z4 offers perfect 50:50 weight distribution, and the centre of gravity is much lower than before. This is thanks in part to the roof; gone is the old car’s folding-metal design, replaced with a lighter fabric lid. It opens and closes in a mere 10 seconds and at speeds of up to 31mph, and also helps bump up boot space by 50 per cent to an impressive 281 litres.

It’s not only the roof operation that’s speedy. The M40i uses the same 3.0-litre twin-turbo straight-six as is found in the M240i. It helps the Z4 reach 0-62mph in 4.6 seconds which, conveniently, is identical to that of a Boxster S. What you don’t get from the Porsche, but the BMW delivers, is a tuneful six-cylinder sound.

The Z4’s gearbox is pretty fantastic, too – smooth, fast and responsive – but it lacks the interaction you get from the Porsche’s six-speed manual.

That feeling of being truly a part of the action is often missing out on the road, too. As with the gearbox, the Z4’s chassis is impressive; the turn-in is razor sharp and the front end devoid of understeer. Against the ridiculously high standards of the Boxster, though, the BMW falls just short on two counts. First, the steering. While precise, it’s a little low on feel, so you end up merely aiming the car along a road as opposed to getting real feedback about what’s going on beneath you. 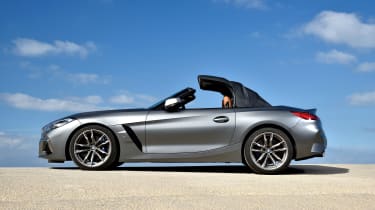 The second issue is weight. The Z4 tips the scales at 1,535kg – a whopping 150kg more than a PDK-equipped 718 Boxster S. The Alpine A110 weighs just 1,080kg. As accomplished as the BMW’s chassis is, it’s impossible to disguise the mass – and leaves you wondering how good it could be if the car was put it on a diet.

While the driving criticisms are fairly picky – a result of the brilliant competition that the Z4 faces – the problems with the interior are bigger. There are some things inside that impress; the build quality is faultless, the infotainment system is great, and the seats are as comfortable on a long journey as they are supportive along a twisty road.

The main problem is with the design. Looks are subjective, but the dashboard layout is barely any different from that of the new 3 Series. In a four-door saloon it looks fine, but it would be nice to have something a little more exciting from a two-seat sports car. Pick virtually anything as a rival – Boxster, TT or even a Ford Mustang – and you’ll find a greater sense of occasion inside.