Prices for the 2019 BMW Z4 roadster start at £36,990 and is available to buy from BMW dealerships now

Prices for the new BMW Z4 roadster have been announced. The German firm’s latest drop-top sports car acts as a direct rival to the Porsche 718 Boxster S, with entry-level models starting from £36,990.

Buyers have the choice of three engines, all of which send their power to the rear wheels. Base-model Z4s get a turbocharged 2.0-litre four-cylinder petrol with 194bhp and 320Nm of torque, allowing a 0–62mph time of 6.6 seconds and a top speed of 149mph. 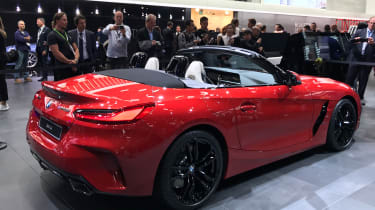 BMW’s new Z4 will only be available with an eight-speed automatic transmission. The German firm originally planned to provide its entry-level Z4 sDrive20i with an optional six-speed manual gearbox, but those plans have been scrapped due to low market demand.

Optional extras include a 12-speaker Harman/Kardon audio system, an Anthracite soft-top, a wind deflector, a head-up display and a suite of safety technology including a lane-change warning, active cruise control and a rear-collision prevention system. 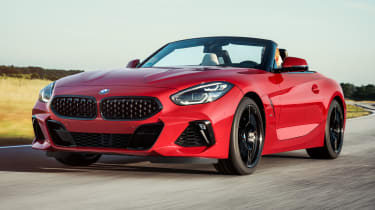 M Sport Z4s can be specced with a range of unique optional chassis upgrades, including adaptive dampers, uprated brakes and an electronically-controlled locking differential. These additions are activated via BMW’s ‘Driving Experience Control’ system, giving owners a choice of either ‘Comfort,’ ‘Sport’ or ‘Sport+’ driving modes.

The new BMW Z4’s looks and proportions stick pretty closely to those previewed on a concept that was revealed at Pebble Beach, California, in 2018. There’s a particularly short overhang at the front end, and a visible decrease in wheelbase compared with the outgoing Z4.

The new roadster has been developed in a joint project with Toyota, although the two models to emerge from the shared process - the Z4 and the Japanese firm’s Supra - are substantially different. BMW’s offering is a convertible only; the Toyota will be sold exclusively as a coupe. 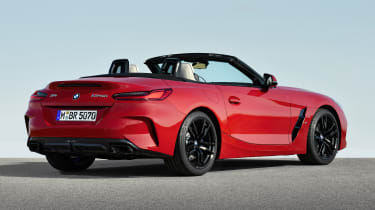 Suspension-wise, the new Z4 features double wishbones up front and a multi-link setup at the rear, which BMW claims will offer a good compromise between handling and sportiness. To help reduce unsprung weight, the front control arms and swivel bearings are aluminium, while the rear axle is a blend of aluminium and steel.

Boot capacity drops to 281 litres but that figure remains unchanged whether the roof is open or closed, and BMW’s optional through-loading system allows transportation of longer items. In the outgoing Z4, the 310-litre load bay dropped to 180 litres with the roof stowed.

Click here to read all about our early prototype drive of the new BMW Z4...

Welcome to our Paris Motor Show hub page. Scroll down for all our Paris content...
BMW Z4 review 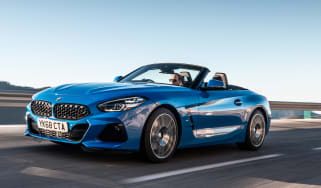