How does the range-topping BMW Z4 M40i cabriolet cope with British roads? 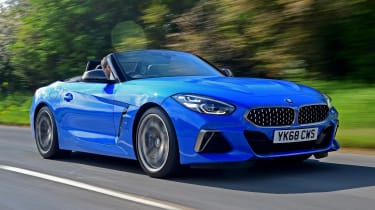 In a world of downsized three and four-cylinder petrol engines, it’s refreshing to see BMW continue to offer its sonorous in-line six in the latest Z4. That’s not enough to make this version our pick of the range, though; the cheaper four-cylinder models make more sense. A Porsche 718 Boxster is still sharper to drive, too, but that’s unlikely to put off potential buyers, who will love the BMW’s mix of style, kit and quality.

In spite of its sporting pretensions, the Z4 has never been the most dynamic model in BMW’s wide-ranging line-up.

It’s been more boulevard cruiser than back-road blaster, and always felt just a little flabby and overweight, thanks in part to its complex folding metal roof. But for this third-generation Z4, BMW has ditched the hard-top for a lighter canvas lid, which folds away in 10 seconds at up to 31mph.

We’ve already driven the new Z4 on European roads, but this is our first chance to try the fresh roadster back in the UK. Our car is the flagship M40i variant, with its glorious six-cylinder petrol engine and an eight-speed automatic box. 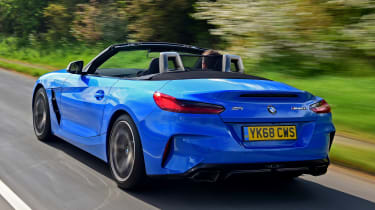 That engine is a particular point of interest, because many of the BMW’s rivals have ditched their high-capacity units in favour of downsized turbos; the Porsche 718 Boxster is now available only with four-cylinder engines, regardless of trim or specification. And while the top Audi TT RS gets a five-cylinder turbo, mainstream models all have four-cylinder units, too.

The Z4 certainly sounds more tuneful than the Porsche, although the manufactured pops and crackles in Sport mode feel a little contrived. You can avoid these by running around in Comfort, but there’s no way of selecting the raciest engine and gearbox settings without the droning backfire when you lift off the throttle, which is a shame.

This M40i version of the Z4 is certainly fast. The 0-62mph dash takes just 4.5 seconds, and like all modern M cars, it’ll top out at 155mph. It turns in sharply, but in some ways still feels a bit blunt; there’s very little steering feel and the front end is heavy. Both the Boxster and the Alpine A110 feel lighter on their feet – which is no surprise when the Z4 weighs almost 500kg more than the fantastic French coupé. 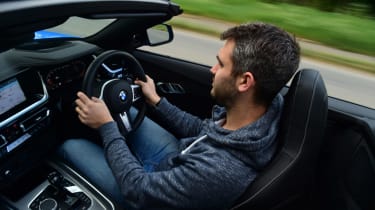 Still, the Z4 displays limpet-like grip and there’s very little in the way of body roll. The perfectly tuned eight-speed box remains one of the best automatic transmissions in any car on sale, reacting positively and smoothly in normal driving, and quickly in manual mode. You sit low, too, just as you’d expect in a sports car, with the perfectly sculpted seats offering plenty of support.

In our experience, though, the lighter, cheaper Z4 sDrive20i is likely to be the pick of the range for most buyers. It’s nearly as fast, and while you may miss that sonorous six-cylinder soundtrack, the sweet chassis and low centre of gravity are unaffected. We’d try the two back to back before signing on the dotted line. 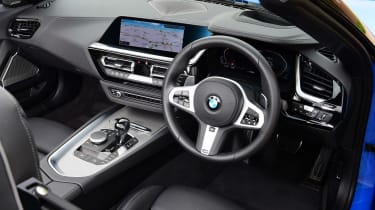 The range-topper also boasts an M Sport differential and adaptive dampers which, unlike on many new models, make a discernible difference to the way this Z4 rides. On rough and rutted British roads, owners are likely to leave the car in its Comfort setting, but through a set of smooth, sweeping bends, the stiffer Sport set-up translates to a much firmer and more controlled drive. It bodes well for the fixed-roof Toyota Supra, with which the BMW shares some of its parts.

In many ways, we’re glad BMW has stuck to its roots and left the Z4 as a cabriolet. Lowering the new canvas roof is simple and remarkably quick, and while the car is a little more blustery at motorway speeds than some of its rivals, on slower roads the buffeting is largely unobtrusive.

Crucially, however, dropping the Z4’s roof has no effect on luggage capacity. The boot is 70 litres bigger than before, at 281 litres, and easily big enough for a weekend away. Cabin storage is poor, however, with tiny door bins and awkward cup-holders hidden under a cubby in the centre console.