Vauxhall is set to introduce a soft-top version of the Adam, and our exclusive image shows how it could look 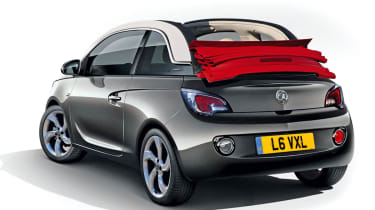 The Vauxhall Adam city car is set to lose its roof with a convertible version that could be just over a year away.

Vauxhall insiders told Auto Express that a convertible design has already been completed by the Adam’s British designer, Mark Adams, and his team. Adams has been promoted to design boss at Cadillac and Buick in the US, but design work on the Adam cabrio was finished some time ago.

Our exclusive image shows how the Adam convertible could look. Given the small proportions of the car, it’s highly likely that the Adam will follow the lead of the Fiat 500 and Citroen DS3 convertibles, with a powered, peel-back roof that leaves the door frames and roofline intact.

A glass rear window will lay down flat above the boot as the canvas folds back on top of it, so a soft-top Adam should boast a similar luggage capacity to the hatch, while rear seat space (already tight in the Adam) won’t be further compromised.

Personalisation will be key to the appeal – there are 30,000 variations of the hatch, so expect a similarly wide choice for the convertible version.