Opel is set to make its return to motorsport, with a new Adam R2 rally car for a one-make rally Cup 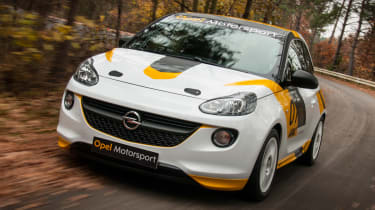 Opel has announced that it will return to motorsport competition with a rally-prepared version of the Adam.

The Adam has been prepared to the entry-level rally R2 spec, so the car is closely based on the production model but with upgraded engine parts, suspension, gearbox, differential and brakes.

The intention is to offer young drivers an affordable entry point into rallying, with the Adam R2 set to compete in the ADAC Opel Rally Cup, which will form part of the German ADAC Rally Masters series from next year.

The Adam R2 is expected to form part of a four-tier rally programme for Opel, which stretches until at least 2016. A VXR road car spin-off, which would be sold as the Vauxhall Adam VXR, is also likely.

Adam R2 drivers will be able to upgrade to a more potent Adam rally car, and than an even higher performance rally model based on the next Corsa to come in the future, with drivers graduating from the German series right up to international WRC competition.

Opel will also introduce a new Astra OPC one-make racing car designed to compete in the Astra OPC Cup – a newly formed series which will run within the German VLN Endurance Championship from next year.

Talking about the announcement, Opel’s Deputy CEO, Dr. Thomas Sedran, said: "These new motorsports activities play an important role in the strategic re-alignment of the company; they are a fundamental element of our brand profile."