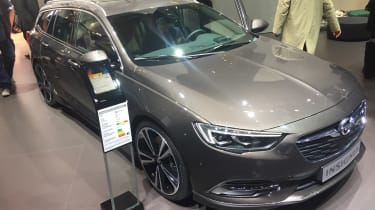 Vauxhall’s rakish new estate – the Insignia Sports Tourer – has made its global debut at the Geneva Motor Show alongside its four-door coupe styled sibling, the new Insignia Grand Sport. It’ll go on sale later this year, with a release late this summer looking likely.

In terms of design it stays broadly similar to the Grand Sport saloon, though adds a longer rear overhang and a longer roofline to accommodate a larger boot. The taillights and rear bumper are slightly different too, while the chrome window surround feeds all the way back to the rear lights. It starts from £18,615, meaning the extra practicality of the Sports Tourer comes in at £1,500 more than the Grand Sport. 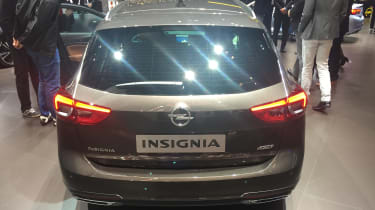 At 4,986mm long, the new Sports Tourer is 73mm longer than the outgoing car, and the wheelbase has increased by 92mm bringing a significant boost in rear passenger space. The overall boot loading length has grown to over two metres, too.

Total capacity is 1,638 litres with the rear seats down – 110 litres up on the outgoing model – although the 520-litre capacity with the seats in place is no better than before.

The seats themselves can be specced with a 40:20:40 folding mechanism, while an electric tailgate with foot gesture opening is also available. Vauxhall has also made loading easier with a lower load lip. 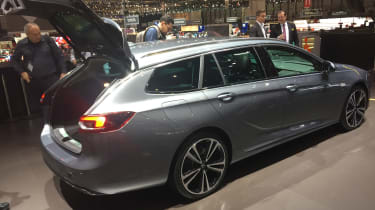 As with the Insignia hatch, a new modular platform means the Sports Tourer is much lighter than the old model – up to 200kg has been shaved off the kerbweight depending on spec. As a result, the engine range is said to offer improved performance and greater efficiency. In terms of engines it gets the same mix of 1.5 and 2.0-litre turbo petrols and 1.6 and 2.0-litre diesels as in the hatch, with a 256bhp 2.0-litre petrol with all-wheel-drive at the very top end of the line-up, priced from £29,210 in range topping Elite Nav trim.

A choice of front-wheel drive and a six-speed manual gearbox or four-wheel drive with an eight-speed automatic transmission will be offered. The latter also gets torque vectoring to boost traction and agility. Adaptive dampers are on the options list.

The interior features the latest version of Vauxhall’s IntelliLink infotainment system, with Apple CarPlay and Android Auto smartphone connectivity. The brand’s OnStar concierge service and Wi-Fi Hotspot will be available across the range.

What do you think of Vauxhall's new estate car? Leave us a comment below...