The pure-electric Vauxhall Vivaro-e Life van-based people carrier is available to order in the UK now, with a 143-mile range and a starting price of £34,645 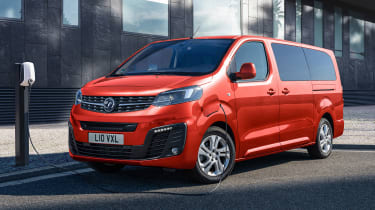 Pricing for the new Vauxhall Vivaro-e Life MPV has been announced. The firm’s first all-electric people carrier is available to order now, priced from £34,645 including the Government’s plug-in vehicle grant – and first deliveries are expected to arrive in late October.

Standard equipment for the entry-level Vauxhall Vivaro-e Life Edition includes 16-inch steel wheels, air conditioning, Bluetooth connectivity, a few cupholders and a pair of electrically adjustable and heated door mirrors. Buyers get a couple of convenience features, too, such as an electronic parking brake and cruise control.

Inside, buyers get heated and massaging front seats, dual-zone climate control and four moveable leather chairs for the rear, which allows the passengers to sit facing each other. Technology levels also increase – the flagship Elite model gets a ten-speaker stereo system and a seven-inch infotainment system with Apple CarPlay and Android Auto. 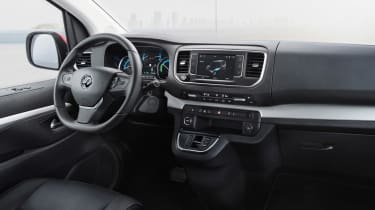 The Vauxhall Vivaro-e Life follows the standard Vivaro-e panel van into the showrooms and, like its commercial cousin, it’s powered by a 50kWh battery pack and an electric motor mounted on the front axle, which has an output of 134bhp and 260Nm of torque. Top speed is electronically limited to 80mph, while the van’s maximum range is 143 miles.

As standard, the Vivaro-e Life features a 7.4kW on-board charger, which can fully replenish the van’s 50kWh battery pack in just under eight hours. However, the system also offers support for 100kW DC fast-charging, which can top the battery up to 80 percent capacity in around 30 minutes.

The battery pack is mounted under the vehicle’s floor, so there’s no difference in practicality between the diesel-powered and all-electric variants. Boot space remains the same, with a maximum capacity of around 4,500 litres – and the Vivaro-e Life can tow loads up to a tonne in weight, which Vauxhall says is a first for the segment.

Private buyers can choose from a few seating arrangements, which offer space for either five, six, seven or eight passengers. The two rear benches are mounted on sliding rails, allowing the driver to choose between legroom or luggage space – and with all the seats folded down, there’s space to transport objects up to 3.5 metres in length.

There’s also an extensive range of driver assistance technology, including lane-keeping assist, a drowsiness alert, semi-adaptive cruise control, high-beam assist, a head-up display and a front-facing camera, which can recognise pedestrians straying into the road and apply the brakes at speeds up to 19mph.

Click the image below for our gallery of the best electric cars to buy right now...