Upcoming seven-seat Volkswagen ID.6 electric SUV has been snapped again, this time tackling some hill routes in the frozen North 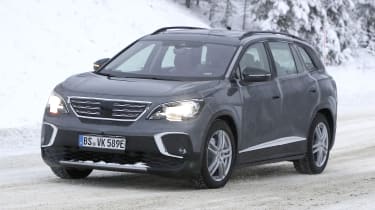 Our spy photographers have spotted a near-production version of the all-electric Volkswagen ID.6 SUV undergoing testing in Scandinavia.

The upcoming Tesla Model X rival - the largest SUV planned on the VW Group’s MEB platform - will go on sale in China and the United States next year, although there’s no official word on whether the new model will be sold in Europe.

The ID.6 was previewed by the ID. Roomzz concept at the 2019 Shanghai Motor Show and, although Volkswagen’s engineers have craftily disguised this prototype to look like a Peugeot 5008, we can tell it will retain most of the show car’s styling features.

Volkswagen has ditched the concept’s wing-mounted cameras and swapped its quirky dot-matrix riddled front bumper for a more conventional item. The ID.6 will also adopt the same face as the rest of Volkswagen’s pure-electric ID. range, with similar headlamps and C-shaped grille surrounds.

The strong two-box profile of the vehicle allows for a third row of seats. The rear of the vehicle looks almost identical to that of the ID.4 SUV’s – albeit scaled up to luxury SUV proportions. Volkswagen has used a similar lighting design and tailgate layout, and the rear spoiler appears to be a larger copy of its smaller sibling’s.

Inside, there’ll be strong similarities with the rest of the ID. range. Expect the same compact digital instrument cluster, high-mounted infotainment system and capacitive heater controls. Buyers should also get an ambient interior lighting system, along with a suite of eco-friendly trim, such as ArtVelours upholstery, which is made from recycled plastic bottles. 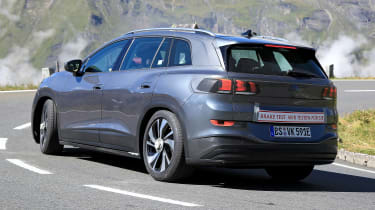 There will be a far greater amount of space on offer though, thanks to the extended wheelbase, loftier roofline and two-box proportions. The ID.6 will be a seven-seat electric SUV, offering up new competition for the Tesla Model X.

As with Volkswagen’s other ID. badged electric vehicles, the ID.6 will be based on the company’s MEB platform. The most powerful model will feature a twin electric motor setup – one on the front axle and one at the rear – which should provide an output of 302bhp and a 0–62mph time of less than seven seconds.

There’s no official word on range for the new SUV yet, but the ID. Roomzz concept was powered by and 82kWh battery pack, which Volkswagen said offered a range of 280 miles according to the WLTP cycle. A 150kW fast-charging system will also likely be provided, which will see the battery recover an 80 percent charge in just 30 minutes.

As with the ID.4, buyers should also be offered an entry-level, single-motor powertrain with 201bhp and a smaller 77kWh battery.

Hungry for more EV news? Check out our list of the best electric cars on sale now…

With Elon Musk saying if a merger with another firm were on the cards he “would have this conversation”, and Volkswagen streamlining its operations, c…
New Volkswagen ID.1 electric supermini due for launch in 2023 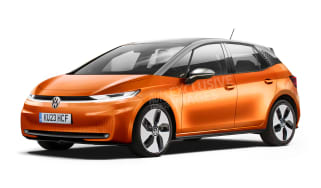 All-electric Volkswagen ID.1 will rival the Peugeot e-208 and Vauxhall Corsa-e when it goes on sale
Entire Volkswagen line-up updated for 2021