The Volkswagen Golf SV replaces the unloved Golf Plus. Can it capture the interest of UK buyers? 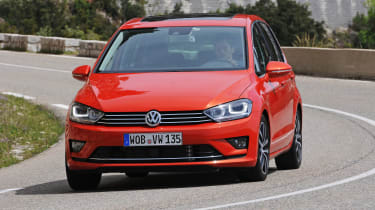 The Volkswagen Golf is Volkswagen's most popular model in Britain, so much so, it sold over 59,000 of them in the UK in 2013 - a credit to its performance, economy and practicality.

But for those buyers who want a little bit more, Volkswagen now offers this - the Golf SV.

The Golf SV is Volkswagen's replacement for the Golf Plus, which in fairness, never really hit it off with UK buyers. The Golf SV is bigger, more stylish and more practical than before, so it's got everything it needs to be a hit the second time around.

Given the name, you'll be unsurprised to hear that beneath the surface the SV is based on the standard Golf hatchback. It uses the same modular MQB architecture as the hatch, but it's 83 millimetres longer, 18mm wider and 126mm taller.

Volkswagen has also stretched the wheelbase by 48mm and although these numbers may not seem huge, it does mean there's a whole lot more space inside for passengers and all of their luggage.

It's fair to say an MPV like the Golf SV is never going to be winning any beauty contests. But, its sharp edges and sculpted panels help to disguise its bigger proportions - for those bigger proportions, people will be buying this car.

The boot for example is now 500-litres big - that's over 70-litres larger than the old Golf Plus and over 100-litres bigger than the standard Golf, on which it's based. But if you need more boot space, the rear seats slide forward, freeing up 585-litres of boot space and the front passenger seat also folds completely flat.

Elsewhere inside, it's pretty much business as usual from Volkswagen. The Golf SV has the familiar dashboard and centre console which are familiar features on Volkswagens these days and there's also the touch screen infotainment system. But as the Golf SV is a more family focused car, there's some bigger storage bins and bigger storage compartments for all your loose odds and ends.

We already know that the Golf SV shares the same MQB platform as the hatchback. What that also means, is that the engine range is also carried over. There'll be four turbocharged petrol engines available from launch, and also three diesel engines.

If you like to keep an eye on running costs, the one to go for will be the 1.6-litre Bluemotion model, which Volkswagen claims will returns over 76 miles per gallon, with emissions of just 95g/km. However, the engine we'd go for is the 140bhp 2.0-litre diesel engine. You'll to sacrifice a little bit in terms of economy, but around 59mpg is still pretty good going and the extra performance - especially when you're carrying four other passengers and their luggage - is very handy.

An area which usually falls victim of the bigger and more practical body in cars like this, is how fun they are to drive and how well they handle - because this car shares so much standard DNA with the Golf hatchback, there is very little to choose between the two when it comes to driving dynamics.

The only real noticeable difference between the two cars is more body roll in the corners, but turn-in is equally as sharp and it holds the road surprisingly well for a car this size. If you go for the GT trim, which is the car we have here, Volkswagen also throws in some firmer sports suspension.

It rides just as well as the other models, but what that also does is counter that excess body roll you'll also experience.

We spent the entire day with the new Golf SV and overall, it's a really impressive bit of kit. Now, there are some rivals out there that can carry a bit more and may look a little more stylish, but when it comes to the Golf SV, there's very little in terms of compromise.

Nobody buys an MPV because they want one - they buy one simply because they need one. But this new Golf SV goes somewhere between narrowing that gap.