Could blue be the colour that stops us seeing red at the pumps? VW thinks so 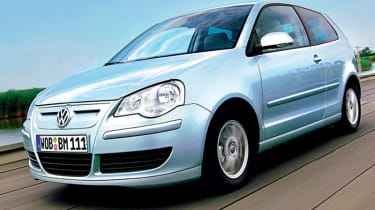 It's rare to find a car which offers big savings over other models in the range without demanding serious compromises. Yet that’s what Volkswagen has managed with its frugal Polo BlueMotion – a model that could save you thousands on your annual motoring fuel bill. With an arguably smarter look than the standard Polo, we reckon the BlueMotion variant is certain to be a big hit.

Could blue be the colour that stops us seeing red at the pumps? VW thinks so, and has launched a special-edition Polo called the Blue-Motion to prove it. Designed in response to the growing need to conserve fuel, limit emissions and cut motoring costs, the 72mpg five-seater is hailed as Europe’s most economical supermini.

But VW has been here before. The Polo BlueMotion is the spiritual successor to the smaller Lupo 3L – a near-100mpg model so-named for its ability to use only three litres of fuel to travel 100km. While the Lupo was impressive, it didn’t convince buyers on the new car forecourts. Will the latest Polo do any better?

The early signs are encour-aging. Even though much of its fuel-sipping nature is down to slippery aerodynamics, styling has not been compromised. The BlueMotion gets a sportier-looking, body-coloured nose with a new bumper, while the re-sculpted rear also helps reduce drag. The standard Polo’s three-cylinder diesel has been fitted with a new exhaust particulate filter plus modified turbo and crank. This results in a car that is 7kg lighter, with significantly taller third, fourth and fifth gears to give impressive economy figures.

It’s often difficult to match manufacturers’ figures on a test drive – but in this case, we bettered them! On a long journey with the air-con turned off, our Polo managed an amazing 76.4mpg – a full 15mpg more than offered by the stan­dard car, and 4mpg up on VW’s claims.

In first and second gears, the difference between this model and the TDI is barely noticeable. Only at higher speeds do the taller ratios come into play – at 60mph, the unit revs at only 1,800rpm.

This is no performance car, but the pleasure comes from wringing out every last mpg, not enjoying surges of acceleration. The 0-62mph sprint time remains unchanged at 12.8 seconds, while the 110mph top speed makes the new-comer plenty fast enough for its class.

What’s more, the fuel gauge barely seems to move. The 45-litre tank gives a theoretical range of 714 miles-plus; not bad when filling up will cost around £43. The BlueMotion’s other trump card is its CO2 emissions. Producing 103g/km – 16g/km less than the standard car – it is one of the least polluting models money can buy. In most other respects, the VW is exactly the same as the usual version. The ride quality is smooth and the cabin is refined, but there’s a fair amount of body roll through corners.

Yet the best news is the price; the UK cost is not yet known, but in Germany, it is only £540 more than the standard 1.4 TDI. Without doubt, the new model will be a valuable addition. Never mind going green – we can’t wait to go blue!