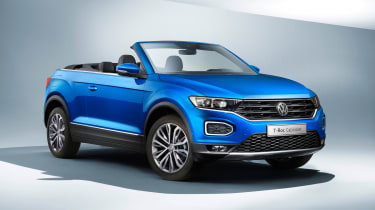 The new Volkswagen T-Roc Cabriolet is on sale in the UK now, priced from £26,750 – and in a world of increasingly niche-driven SUVs, it could be the peak of the genre. It’s a drop-top compact crossover, which has been designed to make the T-Roc line-up one of the more versatile model lines in the Volkswagen stable.

The flagship Volkswagen T-Roc Cabriolet is priced from £31,920 and comes with 19-inch alloy wheels, an aggressive body kit, LED headlights, fog lamps with static cornering function, body-hugging bucket seats, a sports steering wheel and an uprated suspension system, which is 20mm lower than the standard car’s.

Buyers can choose from a pair of petrol engines. Entry-level cars use a turbocharged 1.0-litre three-cylinder unit, developing 113bhp and 200Nm of torque, while more expensive cars use a turbocharged 1.5-litre four-cylinder unit, producing 148bhp and 250Nm of torque. Both engines are mated to a six-speed manual as standard, although the more powerful 1.5-litre unit can be specced with a seven-speed dual-clutch automatic for an extra £1,500.

The T-Roc Cabriolet is a car with few direct ancestors to look back upon, with the ill-fated Range Rover Evoque Convertible being the only recent compact SUV to go topless.

However, while that car was a totally radical departure for Land Rover, the T-Roc Cabriolet can hang a little of its image and purpose on the likes of the Karmann Ghia, Mk1 Beetle Cabriolet and Golf Cabriolet. To that end, it’ll be produced at the same Osnabruck factory as those cars, continuing 70 years of convertible production at the facility. 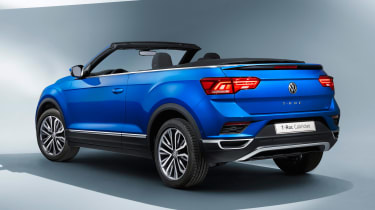 It’s also a segment below the Evoque in size, something Volkswagen marketing and sales boss Jurgen Stackmann believes is vital to this car’s chances of mainstream acceptance - he thinks buyers won’t see this as a convertible SUV specifically, but simply, just a compact convertible car.

The T-Roc Cabriolet loses two side doors and the B-pillar makes way in order to make the folding fabric hood possible. The electrically folding arms and brackets for the roof are positioned in the bodywork either side of the second row of seats, squeezing the back bench down to just two spaces and turning the car into a strict four-seater.

At the press of a button the roof can fold up down or up in nine seconds, and it can do this at speeds of up to 19mph. The mechanicals for the roof have been taken from the old Golf convertible, and the T-Roc uses the same platform as that car, called MQB. 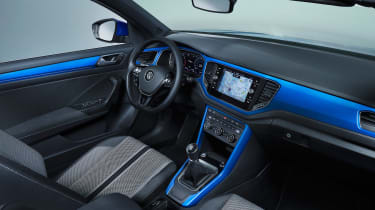 To deal with the loss of rigidity caused by the absent roof and B-pillar, the chassis has been strengthened with new crossbeams, and the A-pillar has been reinforced too. VW has not revealed how much heavier the newcomer is, but convention would suggest a few hundred kilogrammes has been added.

Every piece of bodywork from the front wheel arch backwards is new, and the T-Roc Cabriolet actually grows in size compared to the five-door SUV. The wheelbase is up 40mm to 2,630mm, while the body grows in length too, to 4,268mm. Of course, the folding roof mechanism means that boot space takes a hit to 284-litres, and the opening is more a chute than a wide hatch. The rear bench folds almost flat at the pull of a lever, however.

The roof will only be available in black fabric and it arches high and almost to the very end of the bootlid, to create as much headroom as possible. While the rear bench has been modified, up front the cabin environment does not change from the normal T-Roc, with an eight-inch touchscreen placed centrally.

The module itself is the latest ‘MIB3’ unit, brought over from the latest Passat and including an integrated eSIM for online services. VW’s 11.7-inch Active Info Display digital instrument panel will be fitted as standard to the better-specced R-Line model.

Now read our story on Volkswagen’s other niche-busting SUV – the T-Roc R. Let us know your thoughts in the comments section below…

Do you like the look of the new Volkswagen T-Roc Cabriolet? Let us know your thoughts below... 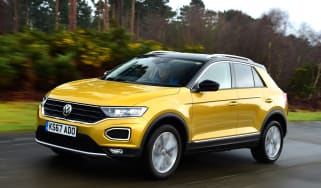 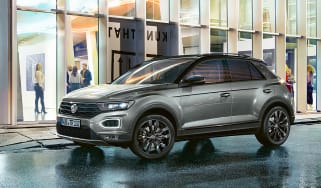 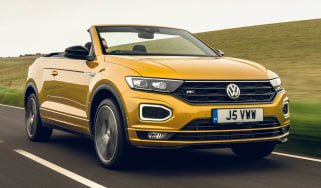 The Golf R was a big hit and now VW is aiming to do it again with the T-Roc R hot SUV. Standing in its way is the Cupra Ateca