It's as hard as nails, but requires far less effort to drive in. No, we're not talking about an all-new DIY product. In fact, we're talking about the toughest version yet of Volkswagen's Touareg off-roader. 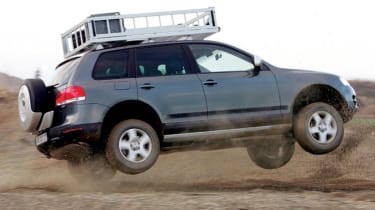 Creating an off-road image from scratch is never going to be easy, but as well as entering the Dakar rally, VW's decision to offer a focused off-road Touareg proves the firm is serious about diversifying into different markets. And while it might look rough and macho, the Expedition is a cool and composed companion from behind the wheel.

It's as hard as nails, but requires far less effort to drive in. No, we're not talking about an all-new DIY product. In fact, we're talking about the toughest version yet of Volkswagen's Touareg off-roader. Badged Expedition, the newcomer emphasises the luxury SUV's off-road abilities, in the same way as Land Rover did with G4 versions of its Discovery and Range Rover.

Unlike the British company, VW has no off-roading heritage to fall back on - the Expedition is charged with creating one. And the German firm's designers have pulled out all the stops, for this is no ordinary Touareg. Instead of simply bolting on adventure goodies, VW has redesigned the car from the ground up.

The most significant changes include a moulded spare wheel holder on the rear door, while the entire lower half of the body is clad in deformable plastic to absorb impacts from rocks and banks. The rest of the exterior is finished in an exclusive shade called Off-Road Grey Metallic, harbouring no secrets about the Touareg's mud-plugging intentions.

Differential, axle, steering and petrol tank guards protect the underside, while further distinctive touches include a bespoke roof rack with powerful spotlamps, a built-in pop-up roof tent and a winch mounted in the front bumper.

The 17-inch wheels look lost underneath the Touareg's meaty exterior, but there's a good reason for them being there. Not only do the smaller diameter rims mean there's less chance of the alloys being damaged on rough surfaces, but they also allow for special tyres with toughened sidewalls, designed to take rocks and ruts in their stride. So how does the Touareg Expedition fare when it comes to the mucky stuff? Well, it drives pretty much like the standard Touareg, but that doesn't mean off-road fans will be disappointed, for even without all the survival gear, VW's SUV is a tough cookie.

The adjustable air-suspension and excellent traction control system mean it will take almost anything in its stride, while the extra body and chassis protection give you confidence to scale obstacles that you wouldn't dare attack in a standard Touareg.

Yet despite the hard exterior, the Expedition is a comfortable companion on the road. The interior is just as luxurious as a normal model, with soft leather seats and a top-of-the-range stereo and sat-nav system.

Our test car was fitted with VW's five-cylinder 2.5-litre turbodiesel engine, which, in effect, is half a bank of the V10 fitted to flagship Touaregs. The unit provides good mid-range torque and cruising ability, but even in the standard car it struggles to give lively acceleration, so with the Expedition's extra kit it's never going to be first away from the traffic lights.

But that's not what this model is about. As a demonstration of what can be achieved by VW with its full-size off-roader, the Touareg Expedition is both an ultra-competent and imposing beast. However, buyers in the UK will have to wait for a decision on whether or not it will come here.

Elements of its styling will certainly be available as accessories via dealers, but whether we'll get the stand-alone model that's set to go on sale across Europe remains to be seen. If you want one, then get down to your local VW dealer and hammer the point home.