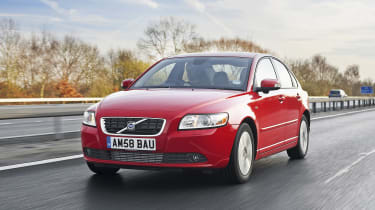 With the S40 DRIVe, Volvo has created the first compact executive model that slots in the sub-120g/km bracket for road tax. The changes don’t address the car’s harsh ride or lifeless steering, but the S40 is solidly put together and an interesting alternative to the mainstream. And best of all, it will save its owners money.

Take a look at the latest Volvo price list, and diesel fans will be dismayed to discover that the base 1.6-litre oil-burning S40 is no longer available.

This is because it’s been replaced in the UK line-up by the S40 DRIVe. The firm believes this will transform the entry-level version of its smallest saloon from being worth avoiding to unmissable.

DRIVe is Volvo’s name for its low CO2 models. And it has managed to slip the S40 into £35-a-year road tax band B, thanks to emissions of 118g/km. More importantly, this has been achieved with only minimal changes to the standard car. The most obvious of these are the smooth alloys, while the bodywork has been lowered by 10mm. Up front, the radiator grille has been blanked off to improve air flow in and around the engine bay.

Under the skin, there are taller gear ratios and the engine management system has been tweaked to put economy ahead of performance. As well as the excellent CO2 figure, the S40 returns 62.8mpg combined. Yet while the saloon meets Volvo’s sub-120g/km emissions target, you don’t feel a compromise from behind the wheel.

There’s a gearshift indicator on the dash, but the engine’s healthy 240Nm of torque at 1,750rpm means that you never feel as if you’ve changed up too early when following its lead. And with the engine revving at 2,200rpm at 70mph, it’s relaxed on the motorway.

Perhaps the most attractive feature of the S40 DRIVe is that it costs only £250 more than the model it replaces. While the modifications do little to improve the S40’s driver appeal, it has morphed from being a car which is easy to overlook to a model that’s the first of its kind.

Rival: VW Golf Bluemotion With its efficient engine, the Golf has emissions of 119g/km, and it offers greater driver appeal than the S40. Its hatchback design offers good practicality, but the Golf can’t quite match the upmarket character of the Volvo.