So, you thought that Volvo already had a mid-sized saloon. It's called the S60, and is the company's rival to the BMW 3-Series. What, then, is this new S40 all about? At first glance it looks like a shortened S60, with which it shares many of the same engines. It's all very baffling. 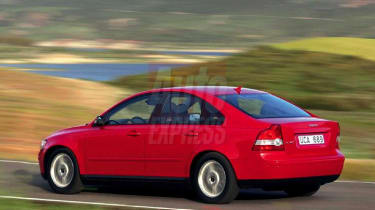 Most buyers think German if they want high quality, but the S40 shows the Swedes can do it refreshingly differently. It's super safe and the airy cabin has an elegant sportiness backed up by the dynamics. This is more fun to drive than the S60, and deserves to break the German stranglehold.

So, you thought that Volvo already had a mid-sized saloon. It's called the S60, and is the company's rival to the BMW 3-Series. What, then, is this new S40 all about? At first glance it looks like a shortened S60, with which it shares many of the same engines. It's all very baffling.

Dig deeper, though, and it starts to make sense. The Swedish firm likes to position its cars either side of the main players, a little bigger or smaller to fill gaps in the market. So while the S40 is offered with a muscular five-cylinder 220bhp turbo (and a gentler 2.4-litre version with 170bhp), it also comes with smaller four-cylinder engines not in any S60. These start with a 100bhp 1.6 and move up to a 120bhp 1.8, as well as two turbodiesels: a 1.6 with 110bhp and a 136bhp 2.0. Prices will start at around £15,000, bringing S40 ownership within reach for VW Golf buyers.

All these four-pots are plucked from Ford's powertrain portfolio. And that's not all Volvo has cherry-picked from its parent company. You'll find its platform (called C1 by Ford, P1 by Volvo) also underpins the C-MAX, the next Focus and Mazda 3. Nothing is carried over from the last S40, although that car will be built for a few more months to fulfil a contract with Mitsubishi.

But the newcomer is far superior to its lacklustre predecessor. The chassis does things that have never been done in a Volvo before. None of its models has ever steered as crisply, keenly and fluidly as this one. On the twists, dips and crests of the test track, the S40 showed amazing grip. Yet, despite this involvement, its responses are both measured and confidence-inspiring, so things will not get out of hand. It's the same out on the road, helped by suspension firm enough to keep tight control without wrecking the ride.

Volvo engineers knew the steering has been a past weakness of their cars, and at last they have done something about it. We tried both the five-cylinder engines, which are smooth and tuneful. The 220bhp variant is the best T5-badged car yet, with hardly any turbo lag, but the 170bhp motor also gives plenty of pace. It has a 137mph top speed and sprints from 0-62mph in 8.2 seconds, compared to 149mph and 6.8 seconds for its big brother. These engines, plus the 1.8 petrol and 2.0 diesel, are available from launch; the others arrive at the end of 2004. T5s come with a six-speed manual, or five-ratio auto box.

And then there's the cabin, one of the most appealing features because it's unlike any other interior. The showpiece is the 'floating' centre console, made of a thin sheet with open space behind. Its design is inspired by palmtops, and there's even a translucent, iMac-like alternative to the standard aluminium look. If you're after a classy saloon and are on a budget, the S40 seems to make perfect sense.