Anyone who has feet that fall between two of the UK's standardised measures will know how hard it is to find a shoe shop that stocks your particular half-size. There are similarly rigid classes in the new car market, but Volvo doesn't conform to established stereotypes. 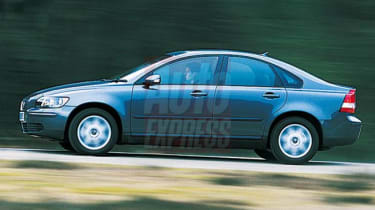 A huge improvement on its predecessor, the S40 is one of this year's most impressive cars, and an excellent compact saloon buy. More radical styling would have widened the brand's appeal, but the understated body and superbly engineered cabin will be attractive enough for most. Until the arrival of the V50 estate, the S40 is the pick of Volvo's range.

Anyone who has feet that fall between two of the UK's standardised measures will know how hard it is to find a shoe shop that stocks your particular half-size. There are similarly rigid classes in the new car market, but Volvo doesn't conform to established stereotypes.

The Swedish firm is sticking to its policy of making models that slot between existing sectors. Its new S40 is bigger than a compact family saloon, but still smaller than an executive four-door. So how does it measure up on British roads? We got hold of the new car for an exclusive first UK drive.

Seeing the Volvo here for the first time, the most striking thing is that it already looks so familiar. Stylists talk of evolution rather than revolution, but there's no denying the similarity between the latest model and its S60 big brother. Yet that's no bad thing, because the larger car is a handsome saloon, and if anything the S40 looks even sharper. While it is wider and taller than its predecessor, the newcomer is now 48mm shorter, resulting in a squat, muscular stance emphasised by the strong shoulder line that finishes with attractive rear light clusters.

Move inside, and the keen eye for design will find even more of interest. While our test car's grey upholstery did nothing for the cabin's overall look, the beautifully crafted controls and quirky 'floating' centre console are a delight. Doing away with the wasted space behind the audio and climate control switches, this thin section makes a great centrepiece to the cabin, but we would have liked to see a similarly adventurous approach taken with the rest of the dashboard. It's all superbly built, yet typically conservative. More importantly, though, there is plenty of legroom in the rear despite the S40's diminutive proportions, and the flat-floored boot is also surprisingly spacious. Slip into the cabin and you are immediately impressed by the levels of adjustment - both the driver's seat and steering wheel move beyond the reach of many competitors. Turn the key and the second pleasant discovery is how quiet the engine is. Volvos are known for their refinement, and this car is no exception.

Once on the move, it soon becomes apparent that this four-door is far more than simply a pretty face. Based on the underpinnings of Ford's next-generation Focus, the S40 soaks up bumps with ease, and is equally impressive when it comes to cornering. With immense levels of grip, nicely weighted steering and the kind of keen turn-in normally associated with a sports saloon, the Volvo is genuinely impressive on a challenging B-road.

Our test car was powered by the firm's 170bhp 2.4-litre five-cylinder petrol engine, which has been re-engineered into a more compact package to fit the S40's short nose. Strong performance is accompanied by a distinctive soundtrack, and 0-62mph takes only 8.2 seconds. While more potent variants get a six-speed manual gearbox, the 2.4i makes do with five ratios, but the short-throw lever is slick and precise. Economy is less impressive, although the combined figure of 33.2mpg is on a par with those of rivals.

The S40 S we drove is priced at £18,613, and once the line-up is completed this summer, an entry-level 1.8-litre petrol unit, 2.0 diesel and hot T5 flagship will also be available. Prices span from £16,113 to £23,763, which opens up the range to a wide cross-section of buyers. With the S40 offering so much in a compact package, downsizing has never made more sense.