New Volvo V40 will bolster the brand’s cluster of small ‘40’ models, evolving from a hatch into an SUV and we have exclusive images of how it could look 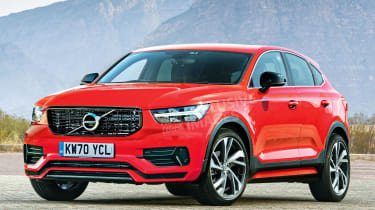 Volvo could launch a “pseudo-SUV” as an indirect successor to the recently discontinued V40 hatchback, the company’s European boss has confirmed to Auto Express.

It will be on sale by 2022, joining an ever-expanding marketplace of compact premium crossovers, currently dominated by the Audi Q2, BMW X2 and Mercedes GLA.

Until the V40’s death in August 2019, it was the only model in Volvo’s line-up which hadn’t migrated to the firm’s larger SPA or smaller CMA underpinnings – it was still based on an adapted version of Ford’s C1 platform, which was acquired during Volvo’s stint under the American company’s control between 1999 and 2010.

The V40’s replacement is poised to be the next brand new Volvo to appear, as the firm moves to complete its 40, 60 and 90 line-ups. However, speaking to Auto Express last year, Lex Kerssemakers, Volvo’s Senior Vice-President for E Europe, the Middle East and Africa, said that customer trends and the need for electrification would probably rule out a conventional low-slung hatchback replacement for the V40.

“We need to do something more creative,” said Kerssemakers. “That’s why we have decided to not just replace the V40 on a one-to-one basis. There’s two things you can’t exclude in the thinking process towards the next generation of V40. The high seating position is really an issue, and we see a lot of people moving from V40 into XC40.

“I was part of it and ran the project when we started the XC40; that polarisation between high and low was much stronger five years ago. Now you see even the die-hard low seating people moving to the higher seats. I personally think they may move back in a while, because it’s a different driving experience, but it’s a trend.”

He added: “There’s also the fact that you cannot offer a new car any more – now, already – which is not equipped to be fully electrified. And to be fully electrified you need capacity to put the batteries in. If you try to achieve that through width and length then you’re instantly into the C/D segment, where we already have V60, S60 and XC60.

When asked if this plan would deliver an XC40-related version of the V40 (similar to the relationship BMW has built between its ‘crossover’ X2 and ‘SUV’ X1), Kerssemakers said: “Potentially, yes. You see that we are not the first to realise this, of course; look at what the competition is doing. We’re not geniuses.

Using the CMA platform – shared with the XC40 – would mean the newcomer would make use of the same line-up of three- and four-cylinder turbocharged engines, all of them using petrol. The firm has committed to phasing out diesel units, and is unlikely to introduce a brand new model with any diesel option going forward. A plug-in hybrid ‘Recharge’ unit, mating a battery and electric motor setup to a 1.5-litre, three-cylinder engine would be expected.

Speculation had grown that the new V40 could look like Volvo’s 40.2 concept. It appeared alongside Volvo’s 40.1 concept back in 2016, which eventually morphed into the production-ready XC40. However, Kerssemakers told us: “We’ve given that car to Polestar now in effect,” and it has since become the all-electric Polestar 2.

As such, Volvo would have to come up with a clean design for any sub XC40 SUV. We’ve previewed this in our main exclusive image.

While Volvo has trademarked the XC10, 20 and 30 names, Kerssemakers also ruled out the idea of building a smaller model to sit below the 40 range, insisting that Volvo can achieve its goal of rising from nearly 650,000 sales globally to 800,000 without additional models. “Of course we’ve looked at it [a smaller model],” he said. “But we’ve clearly decided that there’s probably room for another body style alongside the XC40 in the next two to three years, and that’s what we’re exploring. But that’s it then. Then we go into more depth – keeping our powertrains up, keeping the infotainment up to spec, and so forth.

Are you sad to hear that the Volvo V40 will be morphing into a pseudo-SUV? Let us know your thoughts below... 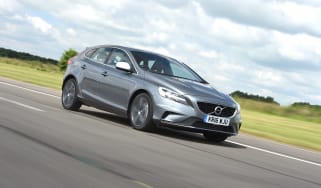