Volvo has revealed the 40.1 and 40.2 concept cars providing our clearest view yet of the new V40 hatch, S40 saloon and XC40 crossover 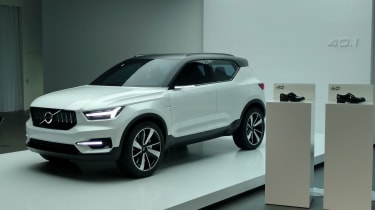 Volvo has revealed the look of its forthcoming XC40 SUV with its 40.1 concept car. Unveiled at an event in Gothenburg, the new model was shown alongside another small family car called Concept 40.2. These preview the first production models to be produced as part of its joint development work with Chinese owner Geely.

The new models, which will give the brand rivals for everything from the VW Golf and BMW 1 Series to Audi’s Q2 and Q3, will be the first Volvos to use the company’s newly developed small-car chassis technology. Called CMA (Compact Modular Architecture), the new platform has been jointly developed by Volvo’s engineers in Sweden and technicians from its parent firm.

In terms of exterior design, both cars have a crossover vibe, with the 40.1 getting a familiar SUV profile similar to that of a shrunken XC90. At the front, it has the 'Thor’s Hammer headlights' and bold grille, while to the side it does without a conventional rear door handle. Overall it's a sleek, sporty, crossover look, especially with the contrasting black roof.

The 40.2 Concept on the other hand, is an entirely different proposition. Said to preview Volvo's next-generation family car, it looks more like a crossover than the current V40, and will sit alongside that car when it goes on sale in a few years. The raised ride height gives it a certain presence, with the sloping roofline creating an almost coupe-like profile. The headlights are very similar to those on the 40.1, but at the rear the 40.2 takes inspiration from the S90 executive saloon. As these are both concepts, we’ve no details on the interiors of either car as yet.

The new cars will both get a variety of powertrains, many of which will feature electrification. The standard engine will be a 1.5-litre turbocharged three-cylinder petrol motor, producing up to 200bhp and driving the front wheels. There will also be a four-cylinder diesel unit. 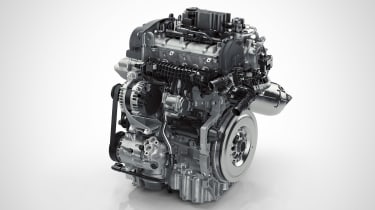 A further new powertrain will join the range, mixing the three-cylinder petrol engine with an electric motor bolted onto an all-new seven-speed, dual-clutch transmission. Called T5 Twin Engine, this powertrain could produce combined outputs of up to 300bhp while returning CO2 emissions of around 100g/km.

CMA has been engineered for multiple varieties of four-wheel drive, according to Volvo’s head of research & development, Peter Mertens. It can be offered with a conventional propshaft configuration, with all four wheels powered purely by a combustion engine or by the new Twin Engine set-up.

However, there will also be even greener plug-in hybrid and pure-electric versions of both vehicles – opening up the possibility of a four-wheel drive XC40 with electrically driven rear wheels. “It is very potentially possible that CMA will get the electric back axle,” said Mertens. 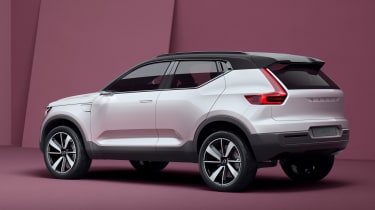 Volvo has confirmed that CMA is engineered for fully electric powertrains, and Mertens admitted that a pure-electric vehicle based on this architecture is already in the pipeline - albeit for launch after the first EV that will use the larger Scalable Platform Architecture (SPA) that underpins the XC90 SUV. That car - equipped with a big enough battery for a range of 500km (350 miles) - is due in 2019, but its smaller brother is expected by 2020, with a more modest target range of 350km, or around 200 miles.

Mertens insisted that Volvo’s EV would be based on conventional, existing models, instead of being a bespoke body style like a Toyota Prius or Hyundai’s new Ioniq. “I have said consistently that the EV doesn’t have to be yelling that it is something different,” he said. “We want people to choose the model they want and then, and only then, decide whether they need a combustion engine, plug-in hybrid or pure electric.” 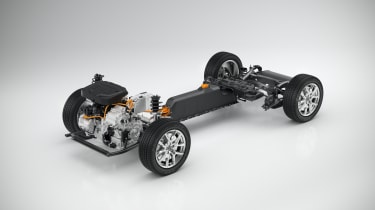 Volvo sources have already admitted that a version of the front-drive T5 set-up could make it into the larger Scalable Platform Architecture (SPA) vehicles, including the next generation of S60 and the recently launched S90 and V90. Mertens told Auto Express earlier this year: “We will definitely have it in the next 60-series models (S60, V60 and XC60) and I can easily see how it would end up in the S90 as well. It’s really promising.”

Volvo is continuing to explore discussions about supplying the three-cylinder engines to rival manufacturers, meanwhile. The first of the two models to arrive will be the XC40, which is likely to make its public debut in production form in 2017. It’s likely to cost from around £21,000, a premium of around £2,000 over the existing V40, which is, in turn, expected to be replaced in 2018.

Although CMA will be shared with cheaper models sold by Geely in China, Volvo officials have stressed that it has been designed to be suitable for ‘premium’ small cars that can rival the established German brands. The main area of structural difference is likely to be in the rear suspension configuration, where the Chinese offering is likely to use a simpler torsion beam set-up. Volvo technicians are said to have focused on refinement as a key area of difference between the two brands’ cars.

Volvo has a ‘3x3’ plan which means a saloon, a hatchback/estate and a crossover in each of its three product lines - 40, 60 and 90. Mertens said there is “no plan currently” to build a car smaller than the V40 and XC40, even though the new platform would support such a move.

“Once we have renewed across the product lines that we know, then we can look at other things,” he said, “but we are not going to follow the Germans by fighting into every niche possible.”

Get the lowdown on the best crossover SUVs to buy right now...