Watch Volvo crash the new XC90 SUV into a ditch

New Volvo XC90 is the safest Volvo ever but how does it cope with being crashed into a ditch? 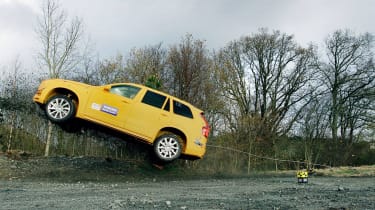 Volvo is calling its brand new XC90 the safest car it has ever built. The Swedish car firm has packed the new seven-seat SUV with an arsenal of safety kit and cutting edge technology to make it the safest car of its type, and says the XC90 represents a major indication that it is well on the way to reach its 2020 goal.

In just five years time, Volvo says that no one driving one of its cars will be seriously injured or killed. It was a shocking claim the manufacturer made in 2010 and now, nearly half way through the programme, Volvo has complete confidence it will accomplish the objective. 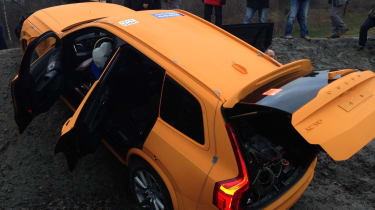 Volvo’s vice president for R&D, Peter Mertens, told Auto Express: “We can’t just get to this goal with just passive safety – there needs to be active safety as well, especially in the area of collision avoidance and autonomous systems to support the driver.

“Vision 2020 is not a statement – it is a commitment. We did not come up with this out of the blue; it is based on a lot of ongoing scientific work. We are on track to reach this goal – there is a long way to go but we are making the right progress.”

One clear example of how Volvo can back up such a strong claim is with the new XC90. At Volvo’s state-of-the-art safety centre in Gothenburg the new XC90 has been put through a rigorous programme of crash tests – tests which are not intended to pass rating programmes but ones which analyse real-life accidents.

Standard on all XC90 models, the high-riding SUV debuts a world-first – a run off-road safety package.

The package focuses on keeping the occupants safely in their seats if the car strays off the road and into a ditch. The package also features special seats that absorb the impact of the car driving into the ditch, launching into the air and landing heavily on the ground. 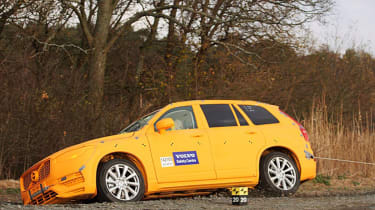 Clever sensors predict the car running off the road and activate a two-stage safety procedure. First, to keep the driver and front seat passenger securely in their seats, the front seat belts tighten as much as possible. Then, to help prevent spine injuries, new energy-absorbing steel in the seat and seat frame deforms to cushion the vertical forces that often occur when the car encounters a hard landing.

Auto Express witnessed just how the new Volvo reacts in an off-road scenario with a ‘ditch test’.

A test car with the latest crash dummy behind the wheel, and two other dummies representing a front passenger and a child sitting in a rear-facing child seat in the rear, was fired out of Volvo’s Safety Centre and towards a ditch of the kind you’d find at the side of any major UK A-road or motorway. 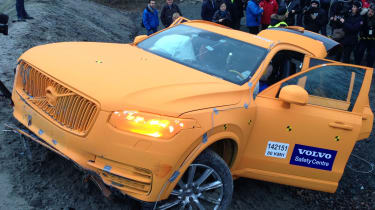 The car was travelling at 50mph and dipped into the 80cm-deep ditch, jumped into the air and landed with an incredible force before ploughing into an earth bank. The car’s airbags and inflatable curtains inflated with experts telling Auto Express that had the passengers been humans, they would have walked away from the crash.

Run-off road accidents are far more common than you’d think. According to Volvo, half of all traffic fatalities in the United States are crashes where the vehicle has left the road, while in Sweden, single-vehicle accidents involve one-third of all fatal and injury crashes with cars.

Now read our full break-down of the safest cars on sale.