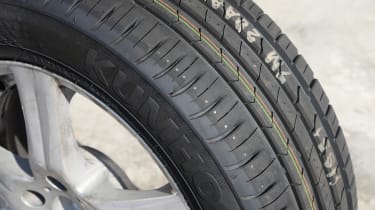 It’s been eight years since Kumho last graced our test. We were rating the same size, but back then it was only a distant ninth. It’s done far better this time, proving the best of the mid-range brands and a step ahead of arch rival Hankook.

The secret of its success is its wet weather performance, where it was third, giving best only to winner Continental and Bridgestone, with a clear gap to the chasing pack. It felt pretty good, too, with a decent balance through the long sweeper. It pushed wide in the tighter turns, but overall felt positive and progressive. That grip could be seen in the cornering result, which saw it take the win, and it finished third in wet braking, around three metres off the remarkable Continental but clear of the rest of the pack. It was down the results in aquaplaning, but the margin in the longitudinal test was relatively small.

The dry braking test was similarly close; the tyre took about three metres more to stop than our standout winner. On the dry track it was less composed than in the wet, feeling soft and sluggish compared with the best. That compliance paid dividends with second in the noise test. But its wet talents meant it was at the back of the midfield for rolling resistance.