Spray guns are fine for most car-related jobs, but which is the best to choose? We test eight to find out... 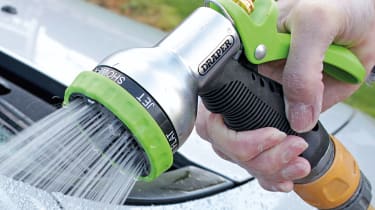 For really tough car cleaning jobs you need a pressure washer, but most of the time using a spray gun with a garden hose will be enough. Many guns offer a choice of pre-set modes, some of which are specifically for gardens, while others can be used on your car. These include jet, shower, mist, flat and cone sprays.

Of the various types, plastic (or ABS) guns are lighter and more wieldy, but not as robust, and often a damaged or worn bayonet connector means the whole thing has to be scrapped. Some kind of water control – usually a variable trigger or lever – is preferable to prevent wasting water.

We liked to see a variety of modes that covered all types of car-based usage, notably rinsing before and after cleaning, and getting a powerful jet under the wheelarches and on the lower parts of the vehicle. We also wanted the modes to be easy to access and recognise, and the more modes, the better.

Metal units scored higher than plastic ones, and we looked for guns to be comfortable and grippy, even when wet. A trigger lock saves aching fingers, while some form of water control helps reduce wastage and allows the user to match the force for the job. As ever, the final factor was the price from online sources.

Despite a slight price increase, the Draper 25342 still has the best balance of performance, build and functions. The Verve in second place is the best of the plastic brigade, while the gadgety but functional new Tacklife comes in third. 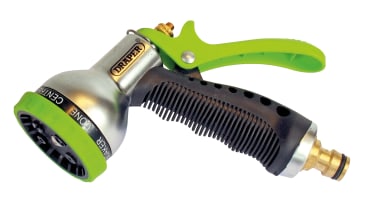 The 25342 was unchanged from the last test and continued to impress. It was well designed, with a rubber handle and finger indents, while the seven modes featured many that were useful to the car owner, and the jet option powered to an impressive 6.5 metres. We liked the metal – mostly aluminium and brass – construction, and the fact that it was still only average weight, at 228g. The named modes also made selection easier. Overall, it combined good build quality with useful features and top performance. 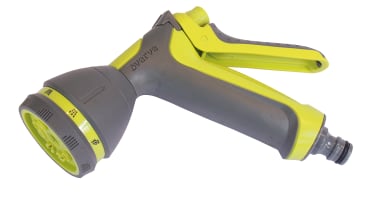 This was the only all-plastic gun we tried that had preset modes, and its construction accounted for its low weight of just 180g. The eight functions were well chosen, albeit denoted by symbols. Jet performance was almost as good as the Draper 25342 and we liked the control knob, which could cut the flow by 50 per cent. The rubberised sections on the handle’s front and rear made it easy to grip when wet, and the locking lever on the top was particularly simple to operate, especially when wearing gloves. 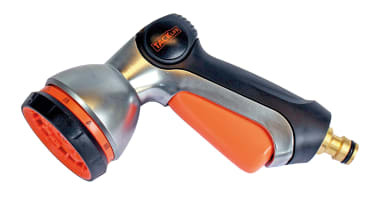 This Tacklife was rather bulky, but still relatively comfortable and easy to use. What looked like the trigger actually turned the nozzle through its 10 modes sequentially, which was a natty feature and unique in this company. There were plenty of modes to choose from and the ‘trigger’ could be used while the water was flowing, the control being a top-mounted, thumb-operated lever. It was one of the heaviest we tried, at 352g, and felt very solid as a result. The jet was plenty powerful, but being the priciest here was its main drawback. 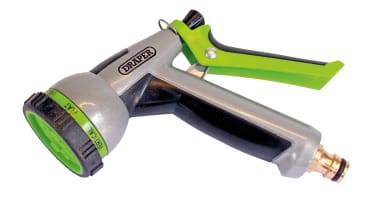 Draper’s latest addition to its range features eight modes, rather than the seven of our winner (above), and has a different design. It too was of aluminium construction and it was about a third heavier, something that could be felt instantly. We liked the screw-type brass bayonet connector, which was solid and easily replaced if necessary. Jet performance was good although slightly poorer than its sibling. The eight named modes were typical, and featured at least four ideal for use on a car. Impressive overall, but could do with being cheaper. 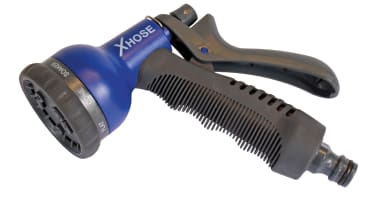 Looking very like the Draper 25342, the Xhose was plastic rather than aluminium, making it lighter, at 143g, and not as robust. Although the modes were clearly named, sometimes the selecting ring didn’t click very accurately. There was a good choice of modes, and we liked the large rubber handle and rear-mounted trigger. 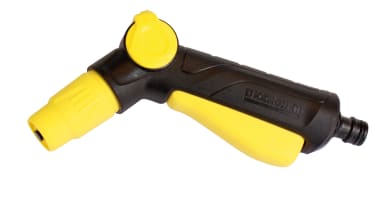 Kärcher’s all-plastic gun was easily the lightest here. It couldn’t be much simpler, mostly all of a piece, the large trigger on the front locking into place with an easy-to-use water-control lever on the top. It had no preset modes, with the adjustment made by turning the nozzle. It worked okay, but had less power than most. 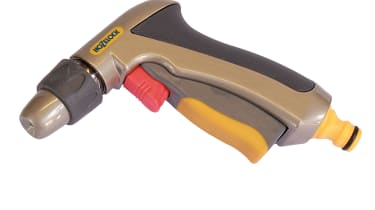 Like the Kärcher, the Hozelock had no preset modes. Mostly the construction was metal, but the trigger was plastic and, disappointingly, so was the bayonet connection. We liked the extra red trigger, which locked the water delivery into one of five positions. The main jet wasn’t as powerful as most others, and when we turned the nozzle back for ‘shower’ it squirted everywhere. 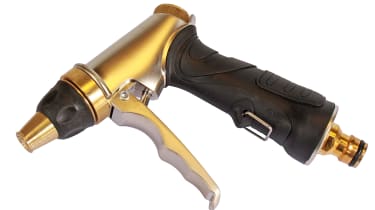 The all-metal Neego was the third gun with no preset modes, but it was solid. It was the heaviest, too, making it cumbersome to use. We liked the large trigger with mouldings and a metal clip to hold it open. To adjust from shower to jet you turn the nozzle, but the jet only reached around 4.5 metres, so cleaning wheelarches was tough.