Good for UK winters, with strong wet performance and competent on snow. 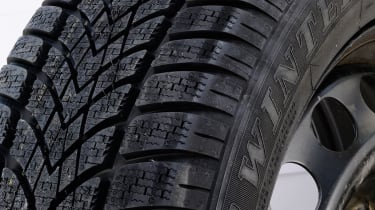 Good for UK winters, with strong wet performance and competent on snow.

Dunlop has to settle for sixth this year, after a podium finish for the 4D in 2012. However, it’s extremely hard to separate it from the Goodyear, Michelin and Hankook – overall results on snow and in the wet were remarkably similar. The Winter Sport had a slight edge in the wet, winning the braking test and runner-up on the handling track. It lacked the winning Continental’s sharpness, but hung on well through the long turns under power. There was a small amount of rear movement, which gave it a good balance and secure feel. Decent results in aquaplaning backed this up. It was near the top of the table in the dry, too – third in braking and just off the pace on the handling circuit. These promising performances were dashed when the Dunlop dropped behind its fourth-placed rival in the frozen north. Braking and traction saw it at the top of the table, and in the circle it came fifth. But like our overall runner-up, it struggled with slush. It was also a step behind the best on the handling track, with noticeably less grip on the fresh snow than the Conti.