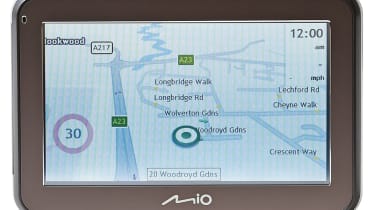 The cheapest sat-nav in the test. Like the Spirit 7670LM, we found the screen less intuitive and slower to respond when compared to its rivals from TomTom and Garmin. The route guidance from the Spirit 5400LM was accurate, but the system switched itself off during our test – forcing us to pull over and reset the guidance. Speed camera detection was good, and the Mio will beep whenever it senses you’re going too fast for the limit. Estimated time of arrival was also accurate, but overall we felt the Mio was lacking in navigation quality against its rivals from TomTom and Garmin, plus it feels flimsier to use.