What are the best tyres for your car? We test eight different SUV specific tyres to match their rising popularity to see which is best 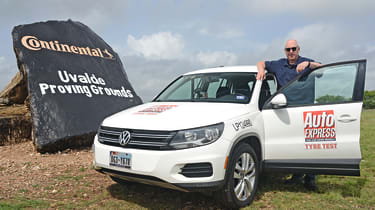 There’s no doubt that SUVs are the current hot ticket for drivers, with just about every maker slotting one – and often more – into its line-up.

This change of focus has also seen tyre makers revamp their ranges. SUVs are usually heavier than the equivalent hatchback, as well as taller, and often come with four-wheel drive. This places different demands on tyres, so some makers have developed SUV-specific ranges, while others have adapted existing designs. And here, in our first test of tyres for the current generation of SUVs, we find out who has done the best job.

Although overall sales volumes remain low compared to the 16, 17 and 18-inch tyres we usually test, we chose one of the fastest-growing sizes, with the biggest share of the market, based on 2018 figures: 235/50 R18.

This was fitted as standard on older models of the Audi Q3, BMW X3 and VW Tiguan, as well as the Mercedes GLA and Volvo XC70. However, despite the off-road nature of many SUVs, our testing remained the same, because precious few venture away from tarmac and none of these tyres is designed specifically to cope with mud or gravel.

We also continued to ask makers to nominate their most suitable tyre, and bought these in the wholesale market to ensure we test what you buy. So which one should you put on your SUV? We headed to Continental’s Uvalde proving ground in Texas with eight options to find out.

Getting a grip on tyre performance

Our testers have been busy both on track in the USA and at an R&D centre in Germany rigorously putting a range of tyres through their paces for our test. Here’s what we did

The open spaces of the Uvalde proving ground in Texas, USA, are perfect for putting a tyre through its paces. Our wet and dry tests were done there, plus cabin noise, using various surfaces on the oval track.

Rolling resistance was checked in Germany at Continental’s R&D centre in Hanover, and we sourced UK prices. All proving ground evaluation was done by Auto Express testers, apart from aquaplaning, which requires specialist skills and experience. This was done by proving ground staff.

The way we found a winner was refined this year. As we have done previously, the results were converted to percentages to accurately reflect the performance differences between tyres. These were added together to form the final result. We only weighted tests to ensure all contributed the same to the final result, with the wet tests accounting for half the result and the rest split between the other assessments.

This time, rather than just looking at the spread of individual results, we factored in how much each contributed to the test result. Where we had to make a choice we favoured key factors, like handling and braking. Price plays a small part in the overall result.

The conditions where most drivers will get close to or overstep the limit are in the wet, so these tests are key to any tyre’s performance. It’s no surprise that it’s part of the EU labelling system, but instead of looking at just braking we also test handling, lateral grip and how the tyre resists aquaplaning in deep water.

The handling was done at the 1.1-mile track that snakes across the Texan scrub. It mimics the circuit at Continental’s German centre-right down to tons of tarmac imported in a series of containers to replicate the surface. 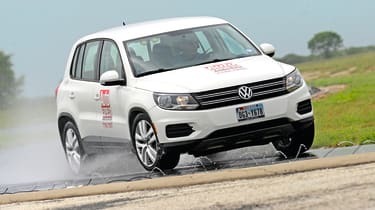 Braking was done using the rail system, which ensures that precisely the same piece of track is used each time to assist getting consistent results. We did a series of stops and measured the distance taken to halt from 50mph. The result was based on multiple stops with outliers removed.

The water depth on all these tests was around a millimetre, but to see how the tyre coped with deeper flooding, we measured both lateral and longitudinal aquaplaning. The curved test was done in 6mm-deep water and the straight in 8mm. For the former the car was driven at set speed increases through a soaked section of a tarmac circle. The loss of lateral grip was measured as the speed went up, and the tyres compared using industry standards.

For the straight test, the rail was used and the car was accelerated with one wheel in water. The difference between the two was measured, with the speed when the slip exceeds 15 per cent recorded – the point at which control is lost. An average of multiple runs was used to get the final comparison.

At the Uvalde proving ground there is a relatively new dry handling circuit, which we used last year. This time we did our tests on a 2,000-metre section, removing the ultra-fast final portion, which revealed little about the tyre. 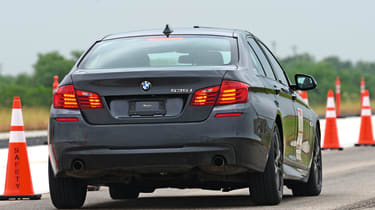 The test section provided two long sweeps, which really allowed the tyre to be assessed, plus tight turns, a banked corner and rapid direction changes. Our test result was based on an average of lap times. Dry braking was done on the three-mile oval track, with the distance measured from 62mph to a stop. An average of several runs was used for the final result.

The EU tyre-labelling system measures pass-by noise because it focuses on environmental concerns. But for many drivers the key factor is cabin noise, which is why it is part of our test.

We coasted down from 50mph over three surfaces – smooth and rough tarmac, plus concrete – measuring noise levels. An average of the three surfaces forms the test result.

Our sole machine test is the key to fuel economy. It measures, to industry standards, the power required to turn a loaded tyre. Imagine pushing a car with correctly inflated tyres and then with 20psi less all round, and you get the principle of rolling resistance.

The result is based on an average of two tyres, with around a five per cent difference in rolling resistance equating to a one per cent shift in fuel economy.

Black Circles, our online tyre retailer test winner, provides the prices that we used in this feature. The figures we quote are what the company charged for a fully fitted tyre at the time of writing or, if the product we evaluated wasn’t part of Black Circles’ range, what it would charge for them. We also corroborated these figures against other outlets.

Wet grip (WG) and fuel economy (RR) are ranked A-G, with the former the best. Pass-by noise is measured in decibels; the lower the figure, the better the rating.

Notable absences include Pirelli, which does not have a general replacement tyre in this size; only those tailored for specific car makers. Vredestein said it did not have a suitable tyre and Bridgestone had stock problems with its nominated Firestone Roadhawk.