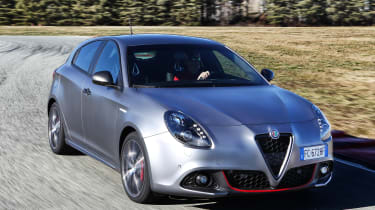 The Alfa Romeo Giulietta has always been one of the best-looking entrants in the premium hatchback market, and now Alfa has decided to give it a slight facelift to link it more closely with the upcoming Giulia saloon. Revealed at an event at the Alfa Romeo museum in Arese, the newly updated Giulietta is ready to take the fight to rivals like the BMW 1 Series, Audi A3, and Mercedes A-Class.

Blink and you’ll miss it, as the Alfa Giulietta styling upgrade is very slight to say the least. The main news is a new air intake, which sits underneath the iconic Alfa Romeo front grille. Rather than being split either side of the grille, it’s now joined into one unit, following the same styling cues as the eagerly-anticipated Giulia sports saloon. 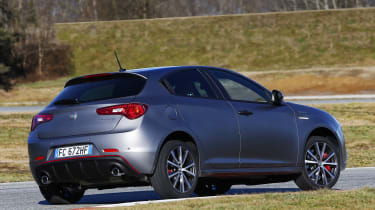 Inside the changes are even more subtle, but there are some new materials, a smartphone-enabled Uconnect infotainment system with music streaming and social media integration, and a new system called Alfa Performance, which has some functions like driving statistics, timers and driving tips.

The range-topping Quadrifoglio Verde model has been dropped, which filled the gap for a hot hatchback in Alfa’s range. A ‘Veloce’ model will replace it instead, with Alfa planning to keep the QV badge for it's seriously hot models in the future. It’s just a name change, though, as the Veloce features the same 1.75-litre turbocharged four-cylinder engine as before and also the 4C sports car. 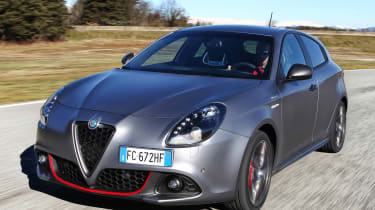 The rest of the range has been revised as well, with some more evocative names. The entry-level car is now simply the Giulietta, with Super, Tecnica, Speciale and Veloce completing the line-up. All cars now get a leather multi-function steering wheel, air-conditioning, Bluetooth, a DNA driving mode switch, 16-inch alloy wheels and paddle-shifters for automatic models. Prices start from £18,450.

The engine range is largely unchanged, but you can now get the 118bhp 1.6-litre diesel model with Alfa's TCT dual-clutch automatic gearbox. This car returns a claimed 74.3mpg and emits 99g/km, but will go from 0-62mph in 10.2 seconds.

We're expecting this facelift to be just a stopgap for the Giulietta, as Alfa Romeo's design chief hinted that the next-generation car could move to a rear-wheel-drive platform from as soon as 2017.

What do you think of the facelifted Alfa Romeo Giulietta? Let us know in the comments section below...