Alpina B5 Biturbo gets a big boost to 591bhp

Alpina has announced its already rapid B5 Biturbo will be getting even quicker, thanks to performance upgrades across the range. The changes are similar to those found on the limited-run 'Edition 50' car, and include a power boost to 591bhp.

Based on the current BMW 5 Series saloon, the B5 Biturbo gets a 4.4-litre twin-turbocharged V8 engine, which is a reworked version of the engine in the BMW M5. The upgrade endows it with 40bhp more – up from 552 in the M5 – and an extra 120Nm of torque, bringing it up to a huge 800Nm. This is enough for a 0-62mph acceleration time of just 4.2 seconds and on to a top speed of 204mph. That's in contrast to the standard M5, which is electronically limited to 155mph.

It's not just the engine that's received an upgrade. As with any Alpina changes under the skin are extensive, and the B5 offers Alpina's own Adaptive Drive sport suspension – including a limited-slip differential. A lightweight titanium exhaust is available as an option, which saves 17kg and endows the B5 with what Alpina describes as 'a unique and distinctive V8 soundtrack.'

Inside, the B5 has been upgraded with BMW's full leather upholstery, which extends to the instrument panel. Lashings of piano black trim finish things off and, as with the M5, equipment levels are generous. The Alpina B5 also represents the only way to get a 'hot' 5-Series estate. While the previous generation M5 was available as a 'Touring' model, the current model isn't. Alpina offers the B5 in saloon and touring guises.

The updated Alpina B5 is available to buy now at prices starting from 108,600 Euro (£76,000), although UK prices will probably be higher. Like all Alpinas, the car is built along the regular BMW production line and covered by a full BMW warranty.

Does this extra power make you want to buy an Alpina B5? Let us know in the comments... 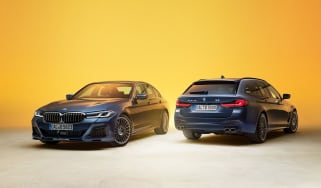