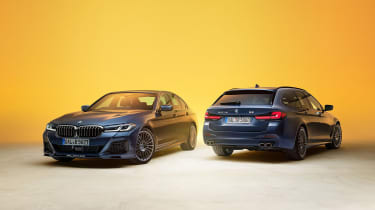 Alpina launched its first take on the recently revealed and facelifted seventh-generation BMW 5 Series in the form of the latest B5 and D5 S saloons and estates. They’re available to order now, in either saloon or estate body styles and with either a petrol or diesel engine. First deliveries are expected to arrive in October.

The Alpina B5 is powered by a tuned version of BMW’s twin-turbocharged 4.4-litre V8 engine used in the newly introduced M550i and the M5. Upgrades over the BMW badged model include a revised cooling system, new intercoolers, a freer-flowing stainless steel exhaust system and a reflashed ECU.

Alpina says the V8 engine has an output of 613bhp and 800Nm of torque – enough for a 0–62mph time of 3.4 seconds and a top speed of 205mph. Power is fed to all four wheels via an eight-speed automatic gearbox and a mechanical limited-slip differential on the rear axle.

The diesel-powered D5 S features a reworked version of BMW’s twin-turbocharged 3.0-litre straight-six engine. Like the V8, it features an uprated cooling system, a free-flowing exhaust and remapped ECU – although it has extra assistance from a 48-volt mild-hybrid system, which provides an extra 11bhp under hard acceleration.

The diesel mild-hybrid engine is mated to the same all-wheel drive system as the V8 petrol model. It has a maximum output of 342bhp and 730Nm of torque, which Alpina says gives the D5 saloon a 0–62mph time of 4.8 seconds and a top speed of 171mph.

Chassis upgrades over the standard 5 Series include new electronically controlled dampers, stiffer springs and larger disc brakes, with fixed four-piston calipers up front and floating single-piston calipers at the rear. 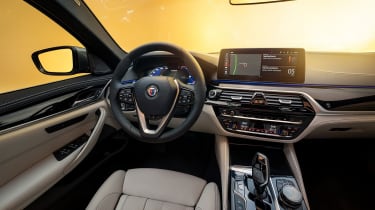 The petrol model is also fitted with an electromechanical rear-wheel steering system, which turns in the opposite direction to the front wheels at low speeds for better maneuverability, or the same direction at higher speeds for better stability. Touring models also come with self- levelling air suspension on the rear axle.

Inside, there’s a new leather-trimmed steering wheel, a choice of leather upholstery colours and a model-specific build number plaque on the dashboard. Like the standard 5 Series, buyers also get a 12.3-inch digital instrument binnacle and infotainment system – although both have been reconfigured with Alpina-specific graphics.

Alpina B5 or BMW M5 - which one would your money go on? Answer in the comment section below! 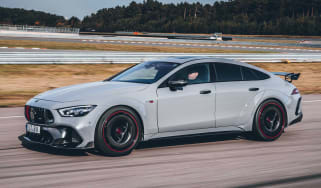 Have updates made the BMW 5 Series even better? We try out the new M550i xDrive to find out…
New 2020 Cupra Formentor: UK prices and specs revealed

The new 306bhp Cupra Formentor SUV starts from £39,830 in the UK, but cheaper, less powerful versions are on the way