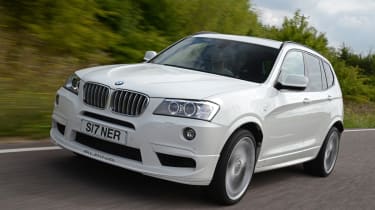 While the Alpina XD3 struggles to match its pedigree rivals for interior class and styling, it’s faster than virtually all of them. The volcanic twin-turbo engine is accompanied by sharp steering and very supple suspension for an excellent all-round package. The X3’s interior looks dated now, but this fast diesel 4x4 is well worth a second look.

Buyers of fast diesel SUVs are spoiled for choice at the moment, with models from Audi, Porsche and Range Rover all recently released. And now BMW tuning specialist Alpina is joining in with this: the Alpina XD3.

Powered by the same 3.0-litre diesel as in the 5 Series based D5 Bi-Turbo – which generates a muscular 345bhp – the XD3 can sprint from 0-62mph in 4.9 seconds. That puts this tuned X3 in the same league as Bentley’s Continental GT V8.

But straight-line speed isn’t the Alpina's only party piece. Despite optional 21-inch alloys (20-inch wheels are standard), the suspension has been tuned to soak up bumps in the road and remain utterly flat and composed through corners.

The tall body leans at first but, once it settles, the corner speeds the car can carry are astonishing. It sounds great, too, thanks to a tuned sports exhaust and old-school turbo whistle, although a diesel rumble is still noticeable.

The interior makeover is less of a success, with comfortable sports seats and unique dials spoiled by nasty Alcantara dash inserts. Yet the XD3 is just as practical as a standard X3, so you can transport the whole family at terrific speed and – thanks to the four-wheel drive – in all weathers.