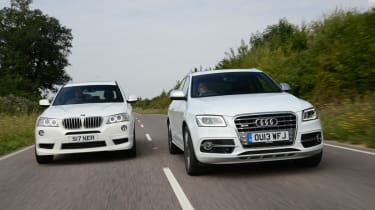 The phrase ‘performance SUV’ isn’t one that sits easily with a lot of buyers. Combining a powerful engine with a high-riding SUV body could be a recipe for disaster, but Audi hopes its first diesel S model isn’t true to that stereotype.

The new SQ5 is based on Audi’s successful Q5 compact SUV, and powered by the 3.0-litre V6 twin-turbodiesel from the A6. It has also been lowered, and the suspension and electronics tweaked, to deliver a sportier driving experience.

You may think Audi has carved yet another new niche with the SQ5 but, while rivals are scarce, a fellow German company has already created its own compact off-roader with high-performance credentials.

BMW doesn’t build a direct rival to the SQ5, but tuning specialist Alpina has based its XD3 on the Munich brand’s X3, replacing the standard car’s straight-six with the tuned 345bhp twin-turbo engine from its 5 Series-based D5 Bi-Turbo.

So can the factory Audi change preconceptions about performance SUVs, while beating the bespoke Alpina into the bargain?

PerformanceFast SUVs are surreal beasts, delivering explosive pace that belies their lumbering 4x4 looks. Both of these cars will have the edge over most high-performance coupés in a straight line, yet it’s through corners where the differences can be felt. There’s lots of grip in both models, but while the Alpina has more initial roll entering a bend, its suspension quickly settles down and the steering delivers far more consistent feedback.

Maintenance Audi offers three-year, fixed-price servicing on the SQ5 for £20 a month, or you can pay £54 a month to cover maintenance and tyres, too. All Alpinas can be serviced at BMW dealers; you’re not tied to the specialist’s chain of 18 retailers.

StylingThe SQ5 doesn’t shout about its performance, with just subtle bodywork tweaks to make it stand out from the standard Q5. Alpina, on the other hand, wants everyone to know that the XD3 is something special, so as well as reworking the mechanicals, it has added deep front and rear bumpers, side skirts and its own-brand decals – although the latter can be deleted at no extra cost. The Audi and Alpina get 20-inch wheels as standard, with 21-inch rims £1,250 and £1,080 options respectively.

1st Alpina XD3 Stunning straight-line performance and engaging handling are at the core of the XD3’s appeal, yet it delivers this pace alongside surprisingly reasonable running costs. Add in its exclusivity, combined with the assurance of main dealer back-up, and the Alpina is well worth the extra outlay over the Audi.

As with Audi’s SQ5, the XD3 marks a first for Alpina. The BMW specialist has lots of experience with performance diesel engines, but the XD3 is its first SUV. The XD3 is based on the BMW X3, but it’s benefited from the same levels of fine-tuning that have made Alpina’s coupés and saloons so popular with enthusiasts.

As with the rest of the range, it’s available from a select few BMW dealers, with prices starting from £54,950 – that’s around £11,000 more than the SQ5, but you get more power and a special finish, inside and out.

2nd Audi SQ5 In some ways, the SQ5 perfectly fits the mould of the performance Audi – it’s fast in a straight line and It’s the first SUV to benefit from the brand’s sporty makeover, and the first S model with diesel power.

Under the bonnet is the 3.0-litre V6 twin-turbodiesel from the A6. The SQ5 also has revised suspension and a sportier design than the standard Q5. It has to be said, though, it's less impressive through corners.

Vague steering fails to inspire confidence, and the suspension and electronics can’t disguise the car’s mass, so it’s shown a clean pair of heels by the XD3.