The new Alpina XD3 offers a more luxurious alternative to the standard BMW X3, but is it worth the extra money? 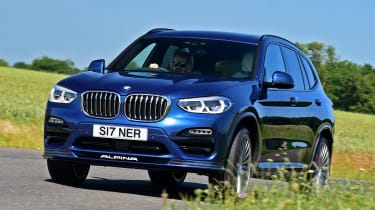 If you’re in the market for a BMW X3 M40d, the extra exclusivity of the Alpina XD3 is hard to ignore. Little separates them in terms of straight-line speed, and while the Alpina prioritises comfort over outright handling, it still feels capable enough through the corners. Throw in plusher interior materials and exclusivity, and the extra outlay doesn't seem like much of a stretch. We still think a petrol alternative would be even more desirable, though.

Do you like the BMW X3, but don’t quite find it special or unique enough? Well Alpina might just have you covered. The Bavarian tuner has turned its attention to BMW’s capable mid-size SUV to create this: the new XD3.

The XD3 starts life as a regular X3, but then it’s treated to a sporty makeover typical of what we expect (and love) to see from Alpina. The front end is treated to a deeper splitter, while the back gets a similar extension in order to house a set of quad tailpipes. The 22-inch alloy wheels and sticker pack test the boundaries of taste, but if you think it’s all a bit much, smaller 20-inch rims are available and the decals are optional.

Inside, the XD3 feels a step above the standard BMW model. The leather coating the seats, steering wheel and door trims feels softer, and the optional piano black trim looks subtle but classy. Alpina door sills and a numbered plaque at the base of the centre console let you know that you’re not just in any ordinary X3, too. 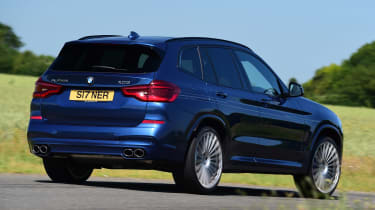 There are other lovely details, too; the stitching on the steering wheel is split half and half between blue and green, while there are small, matching coloured panels in the seat backs. Of course, as with any Alpina, customers can choose to customise the paint and interior finishes to their own specific tastes.

The least successful Alpina tweak inside – and arguably anywhere on the car – are the digital dials. As with Alpinas of old, the dials feature a blue background, but the changes to the graphics and numbers are less successful. It’s at its worst in Sport mode, where a bright green trace follows the rev counter needle around the dial. The fact that the rest of the cabin is so beautifully appointed, highlights further how naff they look.

The main focus, however, was placed on the powertrain. The XD3 features a tweaked version of the X3’s typical 3.0-litre diesel. Alpina chucks BMW’s standard turbo in the parts bin and replaces it with two; one small one to combat lag, and another larger item to deliver a big dose of power. Combined with revised intake and cooling systems, the result is 330bhp and 700Nm of torque. Enough, Alpina says, for the XD3 to cover 0-62mph in 4.9 seconds. That makes it just as fast as the X3 M40d – though left-hand drive markets get access to a quad-turbo Alpina version with 384bhp and 770Nm of torque. 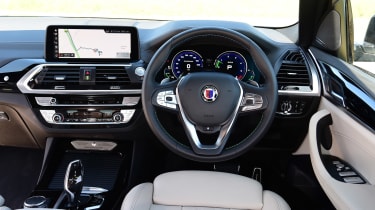 The manner in which XD3 picks up speed is somewhere between deceptive and startling. The engine doesn’t ever sound stressed, so the speed piles on relentlessly and without any fuss, while the eight-speed automatic gearbox shifts smoothly, making the most of the huge reserves of torque when the situation calls for it.

But does a diesel suit the character of an Alpina? In terms of performance, yes, but we can’t help thinking that a silky straight-six petrol engine would make the whole experience feel so much more special.

A petrol engine couldn’t match the XD3’s fuel consumption, however. Despite the performance, it’ll return 44.1mpg (NEDC-adjusted on 20-inch wheels) in official tests, with CO2 emissions of 173g/km.

While it’s neck-and-neck with the X3 M40d in pure straight line speed, the Alpina takes a more relaxed approach to the chassis. The dampers are softer in compression and stiffer in rebound than the X3, while the XD3 gets unique geometry, too. Those big wheels can cause a little bit of jiggle around town, but otherwise the XD3 is supremely comfortable: combined with effortless power and a hushed cabin (no doubt helped by acoustic glazing) – few cars can claim to be a more capable continent-crosser.

Despite the swing towards comfort, the XD3 still manages to feel effective across a twisting back road. Alpina has reworked BMW’s xDrive all-wheel drive system and bolted a limited-slip differential onto the rear axle to ensure that it feels suitably sporty to drive. The extra give in the suspension makes it easy to fall into a smooth rhythm, even over harsh bumps and undulations. Traction, at least on a public road, is almost unflappable, while the steering has a decent weight and is accurate, too.

The Alpina starts from £57,900. Considering that the X3 M40d, the closest BMW model in terms of performance, costs from £53,870, the extra price for the power upgrade, styling tweaks and exclusivity the XD3 offers seems quite reasonable. The total of the test car in these pictures comes to just over £70k, mind, with the price driven up by those big wheels, uprated brakes, a panoramic sunroof and a couple of other choice upgrades.