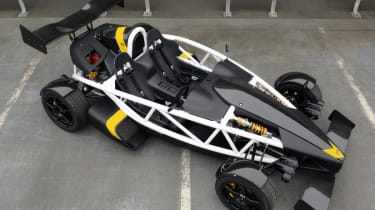 Somerset-based manufacturer Ariel has revealed the latest version of the Atom – the Ariel Atom 3.5R. Powered by a tuned version of the 2.0-litre iVTEC engine found in the current Honda Civic Type R, the 3.5R also features a six-speed sequential gearbox, suspension upgrades and new bodywork.

Ariel has been supercharging the 2.0-litre Honda engine for 10 years now, with power from its latest model up to 350bhp and 330Nm of torque. Driven by the rear wheels, power is put down via a new Sadev six-speed sequential race gearbox with steering wheel mounted paddles. Clutchless upshifts take less than 40 milliseconds and downshifts less than 50 milliseconds with 3.5R capable of five downshifts in less than one second.

Combined with the featherweight 550kg body, the 3.5R dispatches 0-60mph in 2.6 seconds and 0-100mph in 6.0 seconds dead. Top speed is 155mph. An adjustable limited slip differential is also available for customers to tailor their cars to suit individual driving preferences.

An Ariel developed remote oil cooler system and charge cooler are also housed on either side of the 3.5R in the optional side pods, which help air flow and engine temperatures even under hard track use.

The Atom 3.5R will be assembled at the brand’s factory in Somerset, with the first cars expected off the production later this year. Prices will start from £54,000 (plus VAT).