Far from being the movie that made the DB5 Bond’s ultimate Aston of choice, Goldeneye was a bit of a low point for MI6’s most famous agent, because for the next few movies he had BMW company cars. Goldeneye’s chase between Maranello’s brand-new targa and Newport Pagnell’s grandfather clock would be the last Aston-badged action we’d see until Q handed over the keys to a vanishing Vanquish in Die Another Day.

Of course, the benefit of a floating timeline means that while Bond rarely changes, everything else around him – the gadgets, the guns and the cars – can be brought right up to date. So why is it that the car from 1964’s Goldfinger continues to be such an essential ingredient, ahead of its ninth appearance (including cameos) in 2020’s upcoming new film No Time To Die?

Around 1,000 DB5s were built between 1963 and 1965 – but 25 more are about to be added to that tally in the shape of the Aston Martin DB5 Goldfinger continuation. It’s as close as any Bond fan will get to driving the real deal from the silver screen, and costs a cool £2.75million before any local taxes are applied.

While it’s built to be as representative of the original DB5 as possible, it also slips into character as the very car driven by Sean Connery’s Bond in the movie it takes its name from. That means that alongside the authentic mild-steel birdcage-style chassis, hand-beaten and shaped bodywork and the 190bhp triple-carburettor fed 4.0-litre straight-six, the company’s skilled hands – with help from special-effects legend Chris Corbould – have modified the car to feature working gadgets lifted straight from fiction. 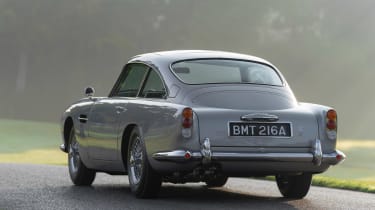 “We are making, perhaps, some of the most desirable ‘toys’ ever built for 25 very lucky buyers worldwide,” says Paul Spires, president of Aston Martin Works, and the company’s very own Q. Time to pay attention…

We’re led through the main workshop at Aston’s Newport Pagnell HQ, past an array of modern Astons wearing an international selection of licence plates, ranging from the Cygnet to the One-77. Around the corner is where the Goldfinger cars are produced by hand in a small, noisy workshop. Here, traditional tools like an English Wheel metalworking machine, and wooden panel-beating bucks, line up alongside a state-of-the-art inspection bay, where, funnily enough, car number seven awaits its short journey to the paint shop.

Each Goldfinger DB5 takes around 4,500 hours to complete, compared with the 500 hours of workmanship that would go into the sixties originals. Paint alone takes 450 hours.

“In the old days, you may have had two panel beaters who didn’t even like each other making the left and right-hand sides of the car,” admits Spires. “The cars may not have been symmetrical! We have a much higher sense of quality control here for these cars. The tolerances are much tighter, but it’s all still done in a traditional manner.” 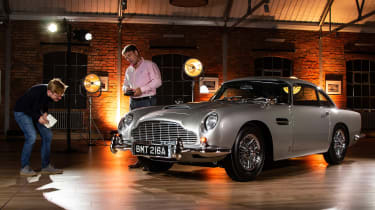 Up close, the level of craftsmanship on show is immense. And thanks to workshop hands with decades of experience working alongside apprentices, one of the best things about the Goldfinger project isn’t the car itself, but the transfer of skills from one generation to the next. “It’s labour intensive, and the skills are hard to find,” explains Paul.

To the actual car, and not everything is exactly as it would be – the five-speed gearbox, all-round disc brakes and chassis corrosion protection, for instance, aren’t period correct. It’s best to think of it as a DB5 built to original specification, but with one or two modern necessities that can be easily justified. But then again, factory-built DB5s didn’t feature front and rear rams, machine guns, an ejector seat or a radar system for navigation.

The tweaks mean that Spire’s description of the DB5 Goldfinger as a toy is semi-accurate, because it’s not road legal (the authorities tend to take a dim view of rotating number plates and tyre-slashing spinners). Buyers do, however, get a lot of fun for their money, with clever recreations of the movie car’s secret-agent features, and ownership of something truly special: a legitimate Aston Martin DB5 straight from Newport Pagnell, and every Bond gadget is signed off with the company’s blessing.

“All of the gadgets on the car, they way they’ve been integrated, is to be robust and have a repeatable manner,” claims Spires. “We worked with Chris Corbould, and he’s worked on the last 15 Bond movies.” The toys can be controlled through a panel within the armrest, just like the fictional DB5, or via remote control. Unsurprisingly the guns aren’t real, but are taken from the DB5 featured in Skyfall, with LED lights mimicking muzzle flash, and an integrated loudspeaker system playing the pop and crackle of gunfire. 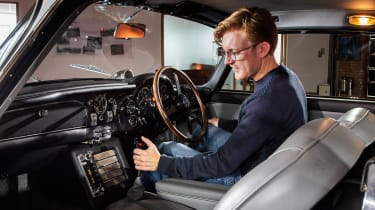 Rotating number plates are built into the boot and the chromed but bulky front bumper, which itself is flanked by a pair of battering ram overriders. There’s a genuinely bulletproof pop-up shield at the back, a simulated oil slick delivery system (it shoots water) and a powerful smoke screen function, which we’re told to avoid toggling in the studio to avoid a classic Q-branch-style mishap.

The interior is special, too. Alongside the faithful wood and metal finish, a secret button reveals a circular radar system with a modern navigation system. There’s an under-seat storage tray – for guns in the movie, but more likely memorabilia for owners. A full-size telephone receiver pops out of the door, and this can be linked to a modern smartphone. Finally, there’s a red button to be found under a flap on top of the gearlever. We’re not quite sure what happens if you press this – we didn’t dare. However, as the opening hatch in the roof for the ejector seat is optional, it’s unlikely you’ll send your passenger into orbit.

The most impressive aspect of the DB5 Goldfinger isn’t the Bond-inspired gadgetry, however, but the car itself. It’s just a shame that such a fastidiously crafted recreation of one of Aston’s most iconic cars won’t ever grace the road, given its modifications from fiction. We’ll have to see if Aston Martin’s new ‘M’, former AMG boss Tobias Moers, thinks that’s something that could change in the future. 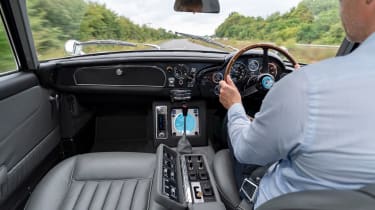 This isn’t a toy, this is a proper DB5. Every part is new using modern materials, but it feels 100 per cent authentic and drives much in the same way as the original – so it responds beautifully to violence.

Open the taps and it comes alive, assaulting all your senses. The roar of the engine; the smell of everything getting hot; the whines; the squeaks; the jiggly wing mirrors. We couldn’t stop smiling, and the Aston PR man couldn’t keep up. That’s not to say the DB5 is faster than a modern hot hatch, because it’s not. Handling? You’ll be wearing that drive-thru coffee within 100 yards. But that’s part of its charm. We love it because there are no electronic driving aids. We love it because it’s got a beautifully mechanical gearbox and a big, skinny steering wheel. We love it because it’s so dinky that anyone taller than a jockey is too big for it. You soon forget the car’s value when bombing down a soggy B-road. Especially when it rolls on crossply Avon tyres.

In some ways, a DB5 is like a Spitfire. The better the pilot you are the more you get out of it, unlike a Eurofighter, where a computer does almost everything for the pilot. We should perhaps spell out that we drove a road-legal development car, but we might have accidentally flipped up the gearknob and fired the simulated twin machine guns while driving. Purely by mistake. The 25 lucky people who buy a Goldfinger DB5 won’t be able to use their car on the public highway, and that’s a shame for them, you, us and everyone else who has loved the DB5 since it first appeared on the silver screen. 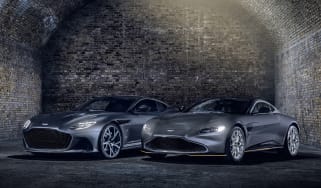