We wind back the clock and hit the road in the reborn 1959 Aston Martin DB4 G.T. 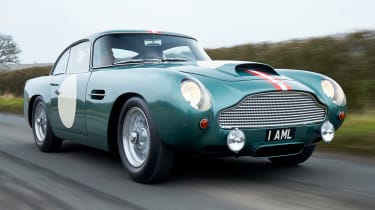 The DB4 G.T. is exquisite in every way. From the raucous but oh-so smooth engine that delivers an addictive hit of performance to the wonderfully immersive transmission and period chassis setup, the Aston has balance, charisma and class that even at this price few cars can match. There’ll be 25 delighted customers salivating at the prospect.

If you’re a multi-millionaire wanting the latest plaything you’re spoilt for choice when it comes to cars. There are a number of track-only hypercar specials – with or without hybrid power – already in existence.

You could put your deposit down on a new Aston Martin Valkyrie, one of the latest to join the fray. However, if exclusivity, flawless detail and something that’s a challenge to master from behind the wheel form your criteria, you might be better served by one of Aston’s more esoteric offerings: the ‘brand-new’ £1.8 million DB4 G.T.

‘Brand new’ is a relative term, of course, because while this stunning hand-beaten lightweight aluminium body and the mechanicals underneath are a recreation of the marque’s famous racer from 1959, this car was built only last year. 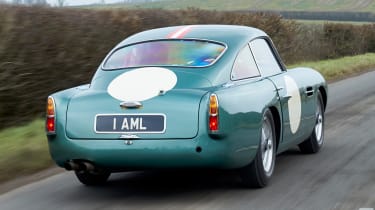 Legend has it the original 75-strong production run was always meant to extend to 100 units, so these 25 new cars use original, sequential chassis numbers “for an unbroken bloodline,” according to Aston and are built to original ‘Lightweight’ specification – well, almost.

As the 25 will all be for track use only (the car we’re driving is registered as a road prototype and we’re the only ones to drive it on the road) there are some safety modifications, including a roll cage, modern bucket seats and harnesses, and a 125-litre fuel cell that’s located inside the single-skin imitation aluminium tank in the boot so it still looks original.

There is one other big difference: whereas the original G.T. used a 3.7-litre straight-six, Aston has upped displacement to 4.2 litres, which means the DB4 now kicks out 350bhp. Weighing in the region of 1,250kg, performance is astounding. 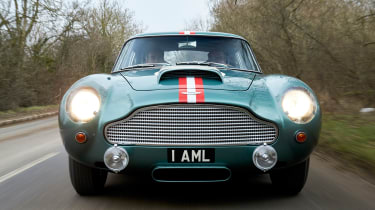 That motive force is sent to the five-inch-wide rear Dunlop crossply racing tyres through a four-speed non-synchromesh dog gearbox. This means that if you don’t get the throttle ‘blip’ right when going down the box, gears will grind with a horrendously expensive sounding graunch.

Get it right and the process of changing gear is beautifully simple and direct, with no slack. You have to be forceful but delicate, which is a theme that runs throughout. With the three Weber carburettors feeding the twin-spark engine’s insatiable appetite for fuel and coughing a heady vapour back into the cabin along with a cacophonous, rounded induction roar, these are sensations you simply don’t get from a modern car. 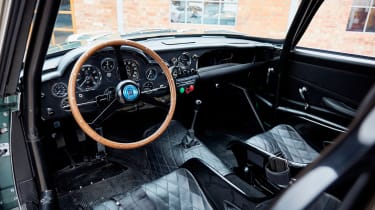 A quick dip of the clutch to snick third and the snarl starts again. The engine note hardens from 3,500rpm as it begins to bark, with a solid wall of torque in the mid-range thanks to that oversized motor (cast by the same people who make Mercedes’ F1 units). It revs with such linearity that it goads you into holding the throttle open longer and longer – only this £1.8 million prototype doesn’t have a rev limiter, so a self-imposed insurance policy of 6,000rpm seems about right.

It’s an organic experience, driving the G.T. There’s enough torque that on greasy country roads the oldschool rubber fizzes into wheelspin if you’re over zealous with the throttle, but the connection to the engine and the response is so good that by lifting off the gas by just a few millimetres it’s enough to bring the traction back.

The steering too is rippling with information. This car uses a narrower 15-inch wheel rim (an option in period) but it’s not quick by modern standards. You can guide the DB4’s beautiful nose with a decent level of accuracy, partly muscling the non-power assisted setup and partly letting it gently move where it wants, employing that same forcefully delicate balance as with the gearbox. And it will move, as bumpy tarmac does deflect the car off line a little. 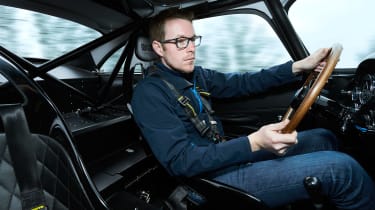 However, this is part of the pleasure. The front floats over ripples while the rear pogos a little more, but it’s surprisingly compliant for what amounts to a race car with race car-like rose jointed chassis parts to improve the quality of interaction between man and machine.

It means you steer it with the throttle as much as the thin wooden-rimmed wheel, trimming the accelerator to adjust your line. To bring every aspect of the driving process together is a challenge and incredible fun; where most modern machinery feels inert, the Aston is animated and buzzing with life. And it’s this along with the craftsmanship that defines the DB4 G.T.

According to Aston Martin Works MD, Paul Spires, each car takes around 4,500 hours to build – and it shows. The detailing is delightful, with Connolly leather lining the seats and transmission tunnel. Aston also got wheel suppliers Borrani to start making the original wire rims again and wouldn’t accept anything less than perfection, while the Smiths gauges and period ‘David Brown’ and ‘Superleggera’ badging mean the car looks deliciously original.