This is the Aston Martin Vanquish Vision concept, one of the most ambitious cars ever to emerge from the British brand. It has been unveiled along side the Aston Martin 003 concept at the Geneva Motor Show.

While the Vanquish name may be familiar, reserved for Aston Martin’s flagship production models, the car it is now attached to is anything but traditional. The Vanquish Vision concept is Aston’s first series production mid-engine car, and it will compete directly with the Ferrari F8 Tributo and McLaren 720S.

Although a concept for now, the Vanquish is scheduled to make production in 2022 and will be largely unchanged. Aston boss Dr. Andy Palmer told Auto Express that the vehicle is around 85 per cent complete. 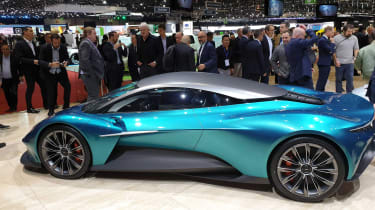 The Vanquish bears a lot of the design DNA that first appeared on the Valkyrie hypercar; the flared haunches, slender headlamp design and swept-back roof are the standout features.

But links to the Valkyrie extend beyond the visual similarities, as Palmer explained to us: “In 2016 we announced Valkyrie - it’s not a ego project, we did it to basically sow the seeds of legitimacy for a range of mid-engind cars. And ultimately the centre of that is a McLaren 720S competitor.”

Aston is keeping a lot of technical information quiet for now, but the British marque has announced that the car will be based on a bonded aluminum structure, as opposed to the carbon tub used by the Valkyrie, and will be powered by an all-new twin-turbo V6 engine.

The engine will be similar to that which first appears in the production version of the 003 concept, which is Aston's rival to the McLaren Senna. However, in that vehicle the V6 engine will be paired with a hybrid KERS system to further boost performance.

Palmer added: “When I joined the company, nobody would ever have said that Aston is coming with mid-engined cars – that’s not what you do, you make elegant DB5s. But what we are showing is that we are not just confined to that one area.”

Welcome to our Geneva Motor Show hub page, scroll down for all our Geneva content...
New £765,000 Aston Martin V12 Speedster put through paces before 2021 launch