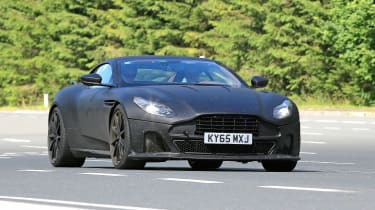 Aston Martin's new DB11 is just about as fresh as supercars come, but further development is already under way that will culminate in a faster and more sporting DB11 S for next year.

Expected in the second half of 2018, these spy shots show the Bentley Continental Supersports rival being put through its paces on public roads. Giveaways that this is no ordinary DB11 include the enlarged front air intakes, chunky splitter and lower stance, despite no obvious changes to the rear.

Given the standard DB11 already pumps out 600bhp and knowing what previous Aston 'S' models have gained, it's reasonable to assume that engineers will squeeze anything up to 50bhp extra out of the twin-turbo V12 engine. While that won't make a huge difference to performance, it should bring acceleration a bit closer to its 700bhp Bentley arch rival. 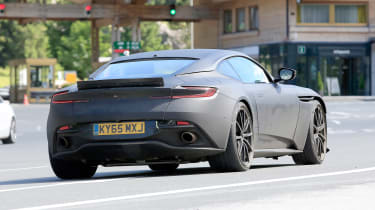 We're expecting more noticeable changes to the chassis, however, and the lowered suspension of this prototype is evidence for that. Tweaks to spring and damper rates should make it feel sharper in the bends, while it could receive stronger brakes and weight saving measures in the platform.

Pricing details are unconfirmed, but with the standard car priced at £155,000, we wouldn't be surprised to see the DB11 S breaching the £180,000 mark. We'll know more details nearer the car's launch date.

Do you like the look of the Aston Martin DB11 S as seen in our spy shots? Tell us in the comments!