New 700bhp Continental Supersports is the fastest and most powerful Bentley yet, and it doesn't disappoint 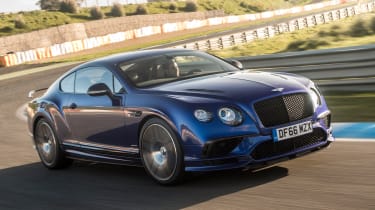 As well as being the fastest and most powerful Bentley ever, the Supersports is also the best 12-cylinder Continental GT yet. It combines tremendous straight-line performance with impressively agile handling, while also being more refined and useable than the previous Supersports. It may carry a £43,600 premium over the GT Speed, but sheer exclusivity will ensure many potential owners consider it worth every penny.

The new Continental Supersports is the fastest and most powerful Bentley ever. Replacing the Continental GT Speed at the top of the model range, the Supersports uses a heavily uprated 700bhp version of the familiar 6.0-litre W12 – powering itself to a top speed of 209mph.

The Supersports, says Bentley, is back by popular demand. The previous version, which arrived in 2009, shifted each of its 1,800 units in double-quick time, and buyers have been hassling Bentley for a replacement ever since. The new Supersports will be limited to just 710 units – matching the car’s 710PS metric power output – across coupe and Convertible body styles. 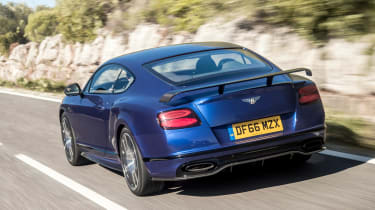 Along with a useful uplift in power, Supersports customers expect a more aggressive and distinctive aesthetic. To that end the car gets new-look bumpers – with a new carbon fibre splitter at the front and diffuser at the rear. There are sill extensions and bonnet vents, plus smoked lights front and rear and what Bentley calls ‘black-finished brightware’ rather than chrome trim.

A rear spoiler can be fitted to the coupe, but those buyers who want an even more striking look might be interested in the ‘X Specification’ pack, which includes a range of two-tone paint schemes and tri-tone interior trim options. Beyond that, Bentley’s bespoking department, Mulliner, promises to satisfy just about every styling whim the customer can dream up.

The chassis is carried over unchanged from the Speed – meaning it rides 10mm lower than a standard Continental GT and runs stiffer springs and anti-roll bars. The engines has been heavily revised, though. The entire intake and exhaust systems are new, including the pair of bigger turbochargers, as is the charge air cooling system.

The main and conrod bearings, meanwhile, have been strengthened to cope with the raised power and torque demands. Along with that monstrous 700bhp, the Supersports develops a massive 1,017Nm of torque. The only transmission option is the same ZF eight-speed automatic that is found throughout the Continental GT line up.

Despite being 40kg lighter than the Speed, thanks to its standard-fit carbon ceramic brakes and titanium exhaust, the Supersports is still a very heavy car at 2,280kg. Nonetheless, with so much power and torque driving all four wheels, the Supersports will fire itself from 0-62mph in 3.5 seconds. The 0-100mph sprint takes just 7.2 seconds – a full 1.7 seconds faster than the previous Supersports could achieve. 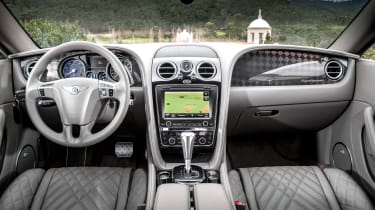 It’s little wonder, then, that this new version feels so rampantly fast in a straight line. The enormous torque output, available between 2,000 and almost 5,000rpm, gives the car a shocking turn of pace almost regardless of which gear you’re in or how fast you’re already travelling. Rarely has an engine made such light work of shifting more than two-tonnes of pressed metal and perforated hide.

The Supersports doesn’t ride quite as smoothly as the standard GT, but there’s still enough pliancy and noise suppression to make it a cosseting long-distance machine. On more inviting stretches of road, the Supersports is actually more enjoyable to drive than anything this heavy has any right to be. The basis of its surprising agility is light, direct steering, tight-fisted body control over crests and a very neutral chassis balance, which means understeer is kept very firmly in check.

Unlike the previous Supersports, the new model still has rear seats, with the multi-adjustable standard chairs rather than sporty bucket items up front. In certain ways, then, the Supersports is much more sensible than the previous version. But factor in its enormous power and straight-line pace, the hilariously over-the-top crackles that fire from the four exhaust tips on downshifts, and in the exaggerated, indiscreet styling, it’s also the most flamboyant Conti GT ever.