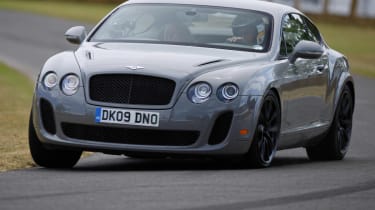 The Bentley Continental Supersports is the fastest, most powerful and driver focused Bentley in the company’s history. It's based on the original Continental GT, and is Bentley’s attempt to turn the plush, luxurious grand tourer into a roadgoing racecar. It very nearly works, too. The two front seats are now carbon fibre shells, and the rear seats have been removed entirely; a carbon fibre strengthening beam sits in their place. Although the Supersports is 80kg lighter, you’ll pay a premium of nearly £40,000 over the standard car but it's still £10,000 less than an Aston Martin DBS. The Supersports can appeal to the ‘green’ buyer, too – not only does it run on unleaded, it can use crop-sourced E85 Bioethanol, too.

The Bentley Continental GT wasn’t designed to be a supercar – it's more of a cross-continent cruiser, intended to eat up motorway miles at an alarming rate and in ultimate comfort. With the Supersports, Bentley changed tack, and in many senses it worked. Acceleration is immense, as it gets from 0-62mph in 3.9 seconds and keeps going to 204mph: this is the fastest Bentley in history. Standard carbon-ceramic brakes manage to stop the 2,240kg bulk with surprising ease, and the firmer suspension setup means the Bentley handles well in the bends, helped by the standard four-wheel-drive transmission. And the Supersports can still cut it as a GT – it's still an amazingly refined cruiser, and the firmer set up does little to damage the ride.

A 621bhp, 6.0-litre W12 is always going to squeeze the bank balance. Bentley claims the Supersports will do 17.3mpg, putting it in line with the Aston Martin DBS (17.3mpg) but slightly behind the Ferrari 458 Italia (20.9mpg). The Supersports' party trick though, is its ability to run on E85 Bioethanol, which should slightly reduce the astronomical running costs, and increase performance at the same time. However, the main cost is certainly the purchase price. A three year, unlimited millage warranty should soften the blow, but you've also got to bear in mind that the Supersports is based on the original Continental GT, not the second generation.

The Continental Supersports retains the standard Conti GT’s sleek lines, but with a whole host of aggressive tweaks that make you aware of this Bentley’s performance potential. New 10-spoke, 20-inch alloy wheels, smoked-steel trim and a set of cutting bonnet vents are the biggest clues, while at the rear there's a pair of polished, oval exhausts – everything about the look of the Supersports screams that this GT means business. On top of all this, buyers can specify a Matt-Grey paintjob – a snip at just £18,890. Inside is the pinnacle of luxury, as you’d expect from the Crewe-based carmaker. Two-tone leather and Alcantara is used throughout, finishing the seats, steering wheel and dashboard – you won’t find any cheap plastics in here.

The Supersports is as practical as a standard Continental GT. It doesn't have the back seats found in the standard car, but these were quite cramped for such a large car, and only really suitable as extra storage space. The boot is generous on a car of this nature; at 370 litres, it's twice the size of that in an Aston Martin DBS. However, there is no avoiding that the GT Supersports is a large car with a daunting kerb weight, and you are continually aware of its size when you're driving it.

Bentley is owned by Volkswagen, and reliability should be strong, as each car is hand-made at Bentley's factory in Crewe. In terms of safety, the Supersports gets carbon ceramic brakes as standard and has the ability to haul its two-tonne bulk from 200mph to a dead stop quicker than just about anything on four wheels. It also gets the same safety features found in the standard Continental GT, including a raft of airbags and four-wheel-drive. 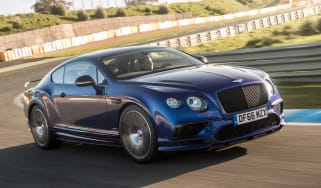 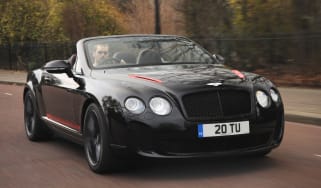