The convertible Aston Martin DB11 Volante will be exclusively V8-powered, with no V12 option available, when it arrives in early 2018 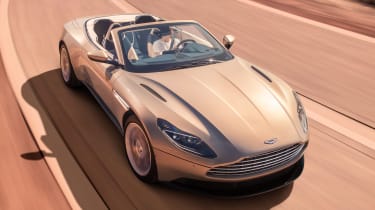 Aston Martin has revealed the new DB11 Volante, a convertible version of its flagship sports car, which will be introduced in the first quarter of 2018 costing from £159,900.

The convertible shares the same bonded aluminium structure that also underpins the DB11 coupe; it comes exclusively with the 503bhp 4.0-litre twin-turbo V8 – no V12 Volante will be made available. Power is fed to the rear axle, which features a limited slip differential, through an eight-speed paddle-shift automatic gearbox.

Aston Martin has gone with a traditional fabric roof, which is made up of eight layers, rather than a clever folding metal arrangement. The hood takes 14 seconds to electronically fold behind the rear seats and 16 seconds to raise. It can be operated with the ignition key at a standstill as well as on the move at up to 31mph. 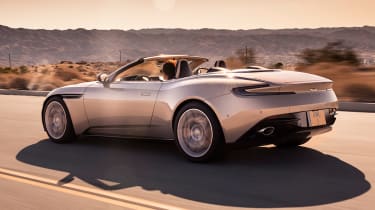 Thorough testing procedures were conducted in order to extend the lifespan of the fabric roof and minimize wear and tear. Aston says it conducted over 100,000 cycles in weather chambers to simulate 10 years of use in the space of a month.

Aston has added strengthening to the Volante to compensate for the removal of the roof – 115kg of addition weight has been added in the process over the coupe. However, Aston also states that DB11 soft-top is 26kg lighter and 5 per cent more rigid than its predecessor, the DB9 Volante.

Performance is slightly affected as a result of the added weight; top speed with the roof up remains 187mph, which is the same as the V8 coupe, but 0-62mph is a tenth down over the coupe covering the benchmark sprint in 4.1 seconds. 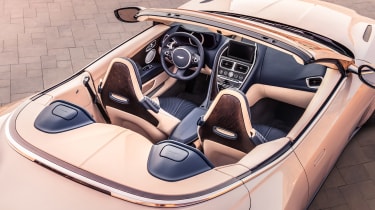 Room for personalisation and options on the DB11 Volante seems endless, with 70 individual options for DB11 Volante customers. Such options include seven different variants of the 20-inch wheels, four colours for the brake callipers and 11 functional options such as automatic parking, garage door opener and an Aston Martin umbrella with holder.

What do you think of the new Aston Martin DB11 Volante? Let us know in the comments section below...