We drive the stunning new Aston Martin DB9 Volante, which gets a 510bhp 6.0-litre V12 engine 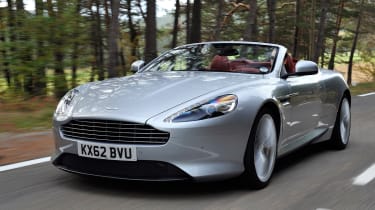 The Aston Martin DB9 is an emotional choice, not a rational one. Objectively, the lower running costs of a Mercedes SL63 AMG, or the practicality of a Bentley Continental GTC, are tempting. But rivals struggle to match the blend of heritage, charisma and exhilaration that the stunning-looking DB9 Volante offers.

The Aston Martin DB9 Volante has been given a new look and a revised engine, but does this makeover go far enough to keep up with rivals like the Bentley Continental GTC?

The visual tweaks are taken from the Aston Martin Virage, now dropped from the line-up. Every panel except the roof has been changed from the old DB9, but the only real change from the Virage Volante is a rear spoiler with a little more of a flick to it.

The cabin is almost the same as before, but it’s been updated with more luxurious materials. Fit and finish is exquisite, including the hand-stitched leather seating – which is now made from eight hides. There’s also an improved sat-nav that pops out of the dash. It’s all very luxurious and simple, but overall the interior feels dated compared with rivals.

There’s no squeaking or groaning from the chassis, either, as the Volante is 30 per cent stiffer than the old model.

That plays a part in the car’s ability on twisty roads, but it’s also down to the new adaptive suspension, which has a choice of Normal, Sport and Track settings. In Normal it’s hardly wallowy or cumbersome, but select Track mode and you’ll get pin-sharp, predictable handling.

The DB9 Volante isn’t perfect: 19.8mpg economy and 333g/km emissions mean steep running costs, while the 187-litre boot makes it tricky to use every day. But it’s still a great car.