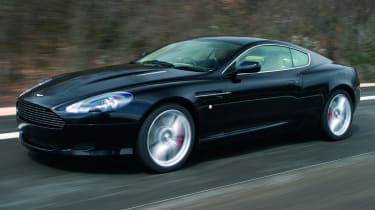 Few cars can match the class and desirability of the Aston Martin DB9. It's the company's quintessential product: a fast, luxurious, front-engined, rear-wheel-drive coupe that will take two people and their luggage to the South of France at high speed in absolute calm and refinement. Judged on its own merits, it's a jaw-dropping car, but as it was first introduced in 2004, with the most recent refresh coming in 2008, the DB9 is beginning to lag behind more up-to-date competitors like the Ferrari California, Mercedes SL and BMW M6.

With a 470bhp V12 engine providing the power, the Aston Martin DB9 is a suitably fast and thrilling grand tourer that is as happy sweeping down a German autobahn at 150mph as it is entertaining its driver on a twisty British back road. Recent updates have added adaptive dampers to the mix, giving the DB9 a superb compromise between ride and handling. Another recent addition is the Touchtronic semi-automatic gearbox – a vast improvement over previous clunky transmissions. Unfortunately, for those who prefer a purer driving experience, this means a traditional manual gearbox is no longer offered.

A six-litre V12 engine is never going to win any fuel economy contests, and the DB9's claimed figure is a predictably dismal 17mpg. Stop-start systems and highly advanced gearboxes are helping Aston's high-performance competition to achive better efficiency than this – although, as always, running costs are rarely a major concern for those with the means to buy cars in this class. Insurance and road tax are also very steep, and the DB9 needs a service every 12 months or 10,000 miles. And despite the car's desirabiliy, depreciation is also quite heavy.

The predecessor to the Aston Martin DB9, the DB7, is often lauded as one of the best-looking cars ever made. Both cars were designed by Ian Callum at the time when Jaguar and Aston Martin were both owned by Ford. The only thing that dulls the appeal of the DB9's classic shape is familiarity – the rest of the current Aston range is designed along similar lines, so it struggles to stand out any more. Interior design has always been an Aston Martin hallmark, and occupants enjoy beautiful hand-stitched leather trim, luxurious wood panelling, plus extremely high quality fit and finish throughout.

If you want an Aston Martin that will fit the family, go for the four-door Rapide. The DB9 is a grand tourer for two people, plain and simple. Even children will find the tiny back seats uncomfortably cramped, and luggage space is pretty limited, too, at only 186 litres. But if you can afford a DB9, then you can very probably also afford a more practical car for the more mundane tasks in life. Headroom, legroom and storage space for the driver and passenger are all more than adequate – they're the only people that matter with this car.

The DB9 was a big step forward over the Jaguar XJ-S-based DB7 in terms of reliability, and reported problems with the engine, gearbox or ancillaries are few and far between. And because it's been on sale for so long, any teething troubles will have been ironed out long ago. This car doesn't get the Euro NCAP crash-test treatment due to being sold in such small numbers, but electronic stability control, traction control, side-impact protection and airbags are all present and correct, making it a safe place to be in the very unfortunate event of crashing it.