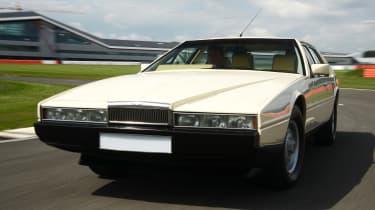 It was at the Lord Mayor’s Show in London in 1977 that I fell in love with the Lagonda. Sat in my Dad’s office as a nine-year old watching the procession, the rows of marching bands and horses literally passed me by. But bringing up the rear was something sensational – the ‘new’ Aston Martin Lagonda.

The stunning ‘Wedge’ designed by William Towns was like nothing else. This was the year Star Wars was released and the Lagonda was pure science fiction – I was in love.

But until this week, I’d never driven one. So it was after a sleepless night – that I headed to Aston Martin Works in Newport Pagnell to collect the concours condition Lagonda perfect in its Cheltenham Beige paintwork and magnolia leather interior.

The angular doors don’t open as wide as you’d think (and there’s not as much room in the back as you’d think) but slipping behind the single spoke wheel was like going back to the seventies, faced with flush buttons on the dash and LED read outs in the instrument binnacle. 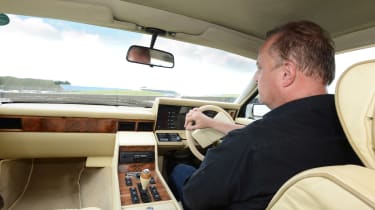 The Lagonda’s electrics were famously fragile, and so it proved with our car. It seemed to be making fuel as the numbers on the read-out rose, while the wipers jumped into action when they weren’t needed.

But other than that, the car behaved perfectly and was a joy to drive where so many cars of that era disappoint. The steering was hefty – assisted, yet direct but with a turning circle of over 11 meters – and the brakes were a match for most things of today. Throttle response was good, with the famous 5.3-litre V8 engine just burbling away gently in the background and the three-speed Chrysler Torqueflite gearbox blurring its changes beautifully.

We didn’t feel it would be right to check out the claimed 8.8 second 0-60mph time, but it felt do-able. Most impressive of all, though, was a ride that was sublime, cossetting us as we drove through the village of Towcester on our way to Silverstone.

They say don’t meet your heroes. I did, and it didn’t disappoint one bit.