The DB9 Volante is everything you'd expect from an Aston - fast, beautiful and engaging to drive 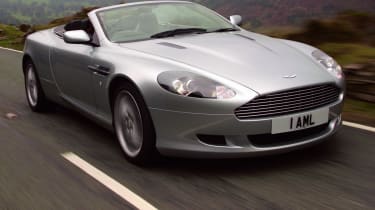 After a round of updates in 2010 the Aston Martin DB9 Volante is still a worthy contender next to rivals like the Ferrari California and Maserati GranCabrio. If you're after ultimate driving thrills the Coupe is the one to go for, but for looking good, cruising around and enjoying the sound of the 470bhp 6.0-litre V12 you want the Volante. The transition from coupe to convertible comes with a weight penalty, but it's still no slouch, covering 0-62mph in 4.8 seconds and hitting a top speed of 190mph. With the faster Virage Volante and DBS Volante above it in the range the DB9 Volante is for those who prefer a more relaxing experience from behind the wheel.

Peel the roof back, squeeze the throttle and the 470bhp 6.0-litre V12 creates a glorious soundtrack - it's surprisingly quick too for a car weighing over 1.8 tonnes. Shifts from the six-speed auto gearbox strike a good balance between comfort and speed, too. Adaptive Bilstein dampers, taken from the DBS, are now standard fit. In normal mode the DB9 glides over bumps, while in Sport mode it firms up noticeably allowing you to attack corners with more vigour. Small amounts of flex in the chassis mean it never holds the road quite as well as the coupe, but its responsive enough for most.

Fuel consumption of 18.2mpg and CO2 emissions of 368g/km are identical to the DB9 Coupe, but don't compare well to its rivals and put the Volante in the top road tax bracket. Even though the Aston has a relatively large 80-litre fuel tank, don't expect to drive any more than 300 miles on a tankful. For those that can afford a V12 Aston though, running costs are unlikely to scare them off.

The DB9 has always been known for its elegant shape, and with the roof down the Volante accentuates those proportions. It's a design that's stood the test of time too, since the car was launched back in 2004. Recent updates include a new bumper and mesh grille, revised headlights, modified side skirts and clear tail-lamp lenses. The interior still feels expensive nd luxurious but some of the fiddly stereo and air-con controls are beginning to show their age.

There are small back seats in the DB9 Volante, but they are best used as extra storage space as even small children will find them a squeeze. Fold the roof back and a neat piece of design means it only encroaches on boot space very slightly - with 172-litres of space compared to 186-litre in the coupe. The multi-layered roof insulated the cabin brilliantly when its in place, offering refinement at motorway speeds that's almost on a par with the tin-top.

The DB9 hasn't been crash-tested by Euro NCAP, but it comes with multiple airbags and ESP as standard. There's pop-up roll over hoops too which deploy in the event of an accident. Aston's reputation for reliability has been steadily improving over the years there shouldn't be any major issues, but as with all exotic cars of this type, regular use and careful maintenance is a must.