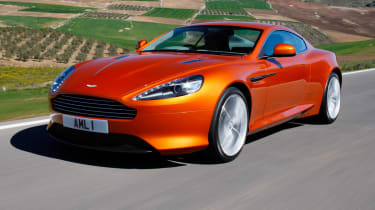 The Aston Martin Virage is another car to prompt head-scratching from casual observers trying to tell the company's various models apart. It looks very similar to everything else in the line-up, but sits between the ageing DB9 and flagship DBS. Aston Martin says the Virage combines the refined grand touring ability of the former with some of the increased performance of the latter. But although the result is undoubtedly a very fine GT car, it's hard to escape the conclusion that Aston is stretching the usefulness of its current chassis to the limit by having three very similar cars based on it.

It almost goes without saying that a V12-engined, 490bhp rear-wheel-drive coupe will be fantastic behind the wheel, but the key to the Virage is how it differs from other models in the Aston Martin range. The flagship DBS has been criticised for being too harsh and uncompromising to be enjoyed in everyday driving, so the Virage incorporates lessons learned from the refined Rapide four-door saloon in order to provide a smoother ride and greater comfort. It's still an immensely capable performance car, though, with a track setting to stiffen things up when greater precision is needed.

If you're wealthy enough to afford an Aston Martin Virage, you're also wealthy enough to ignore this section. But it's worth noting that the newest member of the Aston Martin stable is a good deal more efficient than the pricier DBS, yet runs it very close for performance. Insurance costs are commensurate with the Virage's hefty list price, and the V12 engine's 349g/km CO2 emissions put the car in the top band M. Claimed fuel economy is 18mpg, so you'll be getting to know your local forecourt attendant very well if you buy a Virage.

Cynics will be quick to argue that the Aston Martin Virage was photocopied, not styled, but the company's design director Marek Reichmann has in fact worked some subtle changes into the familiar coupe shape. Every panel has been slightly modified from the DB9, and the design works in elements of the DBS, too. The front end is more angular and the headlights get a strip of LED daytime running lamps to help the Virage stand out. Also new are the 20-inch alloy wheels, which give the car real presence. The cabin also gets some subtle tweaks without straying far from the familiar Aston Martin template.

Aston Martin buyers tend not to be practically-minded lot – or if they are, they own another car for transporting the family. Yet the Virage is meant to be a 'Grand Tourer', so there is reasonable luggage space in the boot (184 litres) and the front-seat passenger at least has plenty of room to stretch out. The rear seats are so cramped as to be almost unusable, but the Virage is far from alone among its rivals in this regard. In short, it's about as practical as you'd expect a £150,000 sporting GT car would be.

The Aston Martin Virage isn't the most up-to-date GT car you can buy, but that does at least mean its mechanicals are well proven. The V12 engine is sourced from Ford and the automatic transmission comes from German gearbox specialist ZF, so there'll be no worries there. As ever, proper maintenance is vital, and will cost you a pretty penny, but the result will be a car that won't let you down. Small-volume models like this are not crash-tested by Euro NCAP, but the Virage has the latest safety technology, including electronic aids to keep all that power in check. 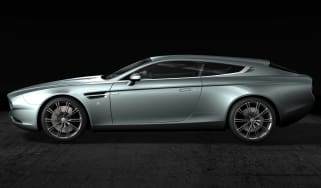 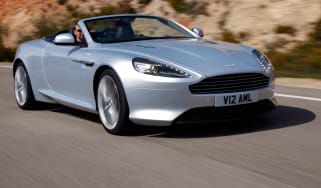 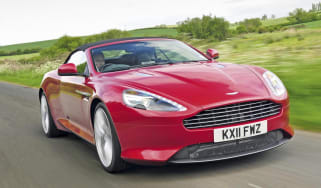 Can the Volante version of new model prove to be as good to drive as the coupé?
Advertisement
Aston Martin Virage 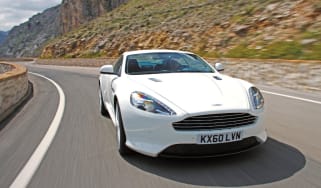 Geneva show star does justice to its famous badge, and is a worthy edition to the line up
Skip to HeaderSkip to Content