Can the Volante version of new model prove to be as good to drive as the coupé? 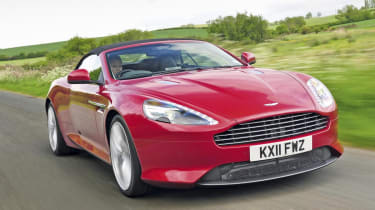 VIEW the Virage as an evolution of the DB family, rather than an all-new model, and it makes sense. Dynamic compromises between the Volante and coupé are hard to detect, which means having the option of feeling the wind in your hair makes the drop-top the more desirable model. Stunning looks, effortless performance...this is Aston at its very best.

WHEN it comes to evocative names, few companies have  such a rich list as Aston Martin. Occasionally, though, the car doesn’t live up to the badge.  The original 1988 Virage was  a low point, so can this new  version finally do the name  justice? We took the wheel of  the Volante drop-top to find out.

At first glance, you might  think this is another missed opportunity. The Virage is  based on the DB9, and although it has a new front end, more sculpted side sills and LED  running lights, it doesn’t really look much different. So why  does it warrant a new name?

Well, the Virage is designed  to sit between the DB9 and the DBS, aiming to deliver the best  of both worlds – a refined GT  and a full-fat supercar when you up the pace. Under the bonnet, the 6.0-litre V12 produces 490bhp – that’s 20bhp less  than in the DBS, but 20bhp  up on the standard model.

Despite the visual tweaks,  it’s still hard to distinguish any difference. However, it does look good, adding some sharpness  to the DB9’s shape. As well  as a new body, the Virage gets fresh 20-inch alloy wheels,  carbon ceramic brakes and updated adaptive dampers. The immaculate multi-layered folding hood looks as classy  as ever. In fact, it fits so snugly that it feels very similar to a coupé with the roof up.

In the past, driving an Aston Martin without a roof could be  a shaky experience. But those days are now well and truly  over, and the difference between coupé and Volante is barely  perceptible. The revised dampers give it a firm but compliant  ride, making it ideally suited to  its dual purpose as a long- distance cruiser and a sports  car, while the steering is well weighted.

The Virage offers  an engaging experience at  any speed, but set the revised three-stage stability control  to Track, and you can safely explore the limits of what  the car is capable of. There is huge acceleration available, and while throttle response could be a touch sharper, all is forgiven when  you hear the throaty roar of  the V12 engine – especially  with the roof peeled back. The familiar six-speed automatic gearbox is smooth and well suited to the Virage’s effortless performance, too.

In transition from Coupé to Volante, the Virage gains 105kg, taking its total weight up to 1,890kg. Ultimately, it’s carrying this extra bulk around that  limits the drop-top’s dynamic  ability. However, viewed as a  stylish and beautifully made GT, with a wicked turn of pace when needed, this is an excellent  addition to the Aston family.