Geneva show star does justice to its famous badge, and is a worthy edition to the line up 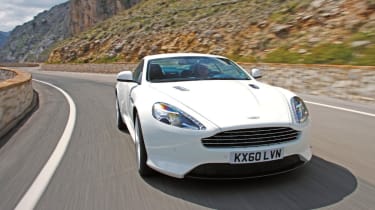 If you thought the launch of the Virage heralded the arrival of an all-new Aston Martin, you will be disappointed. View the car as an addition to the established DB9 line-up, though, and it makes sense. With a price and power output that sits half way between the DB9 and DBS, it fills a gap many buyers will appreciate – and strikes an attractive visual compromise between the two. On the road, it’s not a great deal different to the DB9, but feels more honed. The evolution of the DB line continues – and the newcomer is sure to prove a sales hit for the company.

The Virage name is back! The classic badge was last used on Aston Martin’s late Eighties V8 flagship, but is now worn by a model to bridge the gap between the DB9 and DBS. So has it found a winning middle ground?

The newcomer splits the two exactly on price, at £150,000, while its 6.0-litre V12 produces 490bhp – that’s 20bhp less than in the DBS but 20bhp up on the standard model. Aside from the roof, every panel has been subtly altered.

There’s a new, more angular front end, plus sharper shoulder lines and deeper sills. The revamped headlamps incorporate a sidebar of LED running lights to help the model stand out. It’s not revolutionary, but as with the DBS, the Virage manages to retain the elegance of the DB9 shape while looking sharper and sportier. Further aggression is provided by the 20-inch alloy wheels, which hide the lighter, more powerful ceramic brakes. These complement the revised adaptive damping system and three-stage stability control programme.

On the road, the suspension copes well with smoother surfaces, but over repeated undulations the rear axle feels a little unsettled. However, the reworked traction control package provides a track setting, which is less intrusive on the limit, while any loss of rear grip is nicely communicated.

In fact, the well weighted steering and reassuring front-end grip ensure the Virage is engaging on a demanding road, without detracting from its abilities as a grand tourer.

The wonderful V12 sounds fantastic and gives strong performance. Yet while 85 per cent of the peak torque arrives at only 1,500rpm, throttle response isn’t always as instant as you would expect. And overall, acceleration and handling aren’t much different to the DB9. Still, the Virage always feels special, thanks to its pace and sheer character – as well as its cabin.

It’s largely unaltered from the DB9’s, with the usual mixture of glass buttons, hand-stitched trimming, polished wood and milled aluminium. The car also debuts Aston’s new Garmin navigation system, which provides clearer, more modern mapping than the set-up in previous models. It adds to the upmarket feel. And with its good looks and character, the newcomer is a fine addition to the line-up.