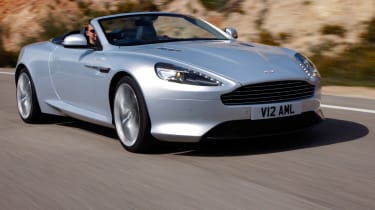 Aston Martin spotted a gap in its line-up, and the Virage is the model that fills it. Going up against rivals like the Ferrari California and Bentley Continental GTC, the £160,000 Virage sits almost perfectly between the DB9 and DBS Volante in terms of power and price. It uses the same 6.0-litre V12 tuned to 490bhp - 20bhp more than the DB9 and 20bhp less than the DBS. Although the styling is similar to the DB9 it's based on only the roof section is the same. The most obvious styling changes however are the sharper headlights with built-in LED running lights and the more pronounced side sills.

Not as supple as a DB9, nor as firm as a DBS - on the road the Virage continues to bisect the other models in the range. The 6.0-litre V12 produces its best above 3,000rpm where it delivers searing pace and a noise to match. Fold the roof away and the snarling exhaust note makes your hairs stand on end, while the accurate steering and wide, grippy tyres allow you to carry masses of speed through the corners. The standard carbon-ceramic brakes provide massive stopping power.

The Virage Volante is more efficient than both the DBS Volante and DB9 Volante by 0.6mpg and emits 18g/km of CO2 less. But the Virage's figures of 18.8mpg and 349g/km are hardly clean - and in the real world you'll be lucky to achieve these figures, unless the car spends most of its time doing a constant 60mph on the M1. Prepare for servicing, road tax and insurance costs to be sky high, too.

Any car that takes the DB9 Volante as a starting point is bound to turn out OK - and the Virage is stunning to behold. Although the proportions are roughly the same, the Virage gets a new front end, more sculpted side sills and LED running lights to give it a unique look, even at night. New 20-inch alloys are added too. Although the Virage is beautiful and looks more modern than a DB9 it feels more like a facelifted DB9 than a whole new model.

A boot capacity of 172-litres is bigger than both the DB9 Volante and DBS Volante and only 14-litres less than the Virage Coupe even with the roof folded down. The back seats are extremely cramped, but can double up as extra luggage space making it surprisingly practical for a car of its type. The multi-layer roof provides excellent insulation from the elements and wind noise - even at high speeds it delivers coupe-like levels of refinement.

Sharing engine and platforms through the Vantage, DB9, DBS and Virage ranges has cost saving benefits, but also means the technology is tried and tested, so should prove reliable. There are no Euro NCAP crash test results for Aston Martins, but thanks to a super-stiff structure, pop-up roll over hoops and multiple airbags as standard the Virage is is a safe place to be in the event of an accident.