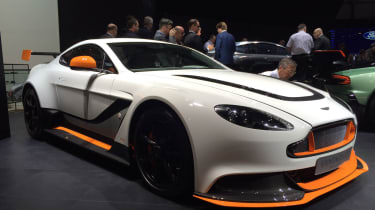 Aston Martin has blasted into the Geneva Motor Show with its most focused production performance car ever: the new Vantage GT12.

Designed to bridge the gap between the brand’s road and race cars, the GT12 has benefited from extensive weight-saving measures, an aerodynamic overhaul and significant mechanical upgrades over the standard supercar.

With production limited to just 100 models, this exclusive Vantage costs £250,000 – around £100,000 more than the V12 Vantage S it’s based on. The majority of models have reportedly already been sold to Aston's 'V.I.P' buyers. 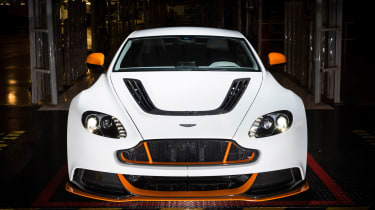 Aston displayed the car the the Geneva Show with the nametage 'GT3' but to avoid a legal wrangle with Porsche the firm was forced to change it to 'GT12'. Porsche claims it owns the rights to the GT3 name, despite it appearing on a number of different models over the years.

The GT12 is also lower and wider than any other Vantage before it, with a 15mm wider track at the front and 33mm wider at the rear.

At the heart of the GT12 sits the naturally aspirated 6.0-litre V12. A new titanium exhaust and magnesium inlet manifold help boost power from 565bhp to 595bhp. Performance figures are yet to be finalised, but early tests show two-tenths have been cut from the 0-62mph time, taking it to 3.5 seconds. 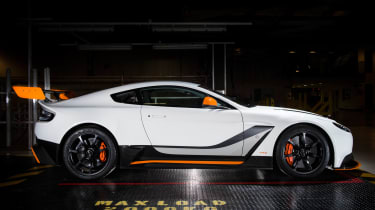 “The Vantage is the sportiest car we have,” said David King, Aston’s director of special projects and motorsport. “It’s based on a racing platform and we wanted to bring the road car closer to the race car, so we utilised technology from the racing series to do that.”

The production car’s part-aluminium, part-steel body has been replaced by a carbon fibre structure – everything but the doors has been switched for carbon.

Inside, the electric seat mechanisms have been removed, with a full carbon fibre centre console and sports seats, lightweight battery and reduced sound deadening contributing to the 100kg weight loss. Spec all the lightweight options, and you can save a further 25kg over the V12 Vantage S. 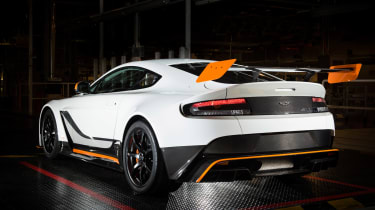 “The GT12 has to be credible on track, but this is performance matched with craftsmanship and attention to detail,” said King. “This is the most focused Aston Martin by some margin.”

Aston Martin has also revealed a track-only hypercar called the Vulcan and a new DBX concept that previews a crossover GT car in Geneva.

Now read more about all the lastest cars at the Geneva Motor Show.