The Aston Martin Vulcan is a mad track-only supercar based on the One-77 with a £1.8m price tag. 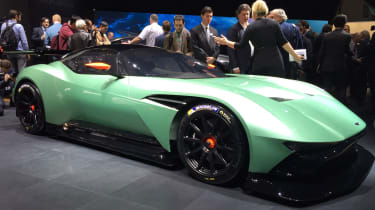 Aston Martin is taking on the McLaren P1 GTR and Ferrari FXXK with a track-only hypercar of its own. Called the Vulcan, it’s loosely based on the roadgoing One-77, but with the 7.0-litre V12 engine turned up to ‘800bhp-plus’ and an even steeper asking price of £1.8m.

The car has made its debut on Aston’s Geneva Motor Show stand, with the first public demonstration laps scheduled for the Le Mans 24 Hours race in June. Only 24 examples will be built in total, a nod towards Aston’s success in 24-hour endurance races around the world, and only the most committed Aston owners need apply.

• What is the world's fastest road car? 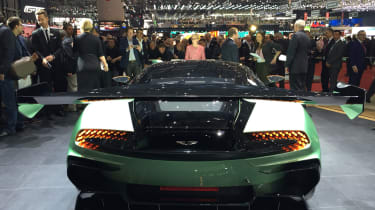 The sensational new shape, dreamt up by Aston head of design Marek Reichman, is designed to shock with its ultra-wide track, huge rear wing and extreme aero package. Cavernous air vents in the bonnet are there to cool the immense engine, while the slash from the front wheelarch along the flanks is a new idea for Aston.

However, there are elements of the new Aston Martin DB10 concept in the low-set front grille and slot-like headlights, suggesting the Vulcan isn’t only about shock and awe – it points towards the next-generation DB9 and V8 Vantage, both due within the next two years. 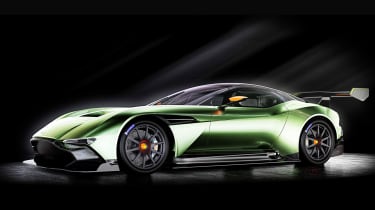 Based around a lightly modified version of the One-77’s carbon-fibre tub, the Vulcan counters the hi-tech hybrid set-ups used by Ferrari and McLaren with a refreshingly traditional front-engined, rear-wheel-drive layout. The engine is a naturally-aspirated V12 tuned to over 800bhp, and channelling its power through an Xtrac six-speed sequential gearbox.

Designed to meet full FIA specification, the Vulcan also gets a limited-slip differential, magnesium torque tube with a carbon propeller shaft and 380mm carbon ceramic brakes discs at the front with 360mm discs at the rear. Unique 19-inch Michelin tyres are controlled by pushrod suspension with adjustable dampers, while anti-roll bars and variable traction control offers assistance to the driver if required. 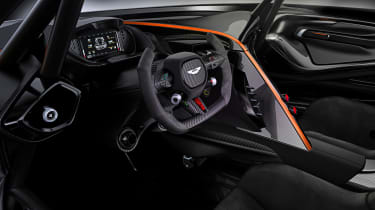 Stripped out to help reduce the overall weight to 1,350kg (150kg less than the One-77), the interior is a feast of carbon fibre, Alcantara and titanium switchgear. A full digital display sits behind a semi-circular steering wheel chopped off at the top. Aston claims it is "almost infinitely flexible in terms of colour and trim options".

All 24 lucky owners will also be offered the opportunity to improve their driving skills under the tutelage of Aston Martin Racing’s Le Mans-winning Darren Turner. 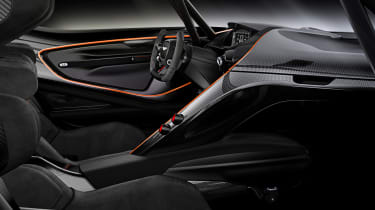 Why build a car like this and why now?

Building on what we’ve achieved in racing is important – it’s important to make that link between the race and road cars. We’ve seen a trend over the last nine to 12 months that One-77s are selling for way above list price, which is a good sign. We then added in all the lessons learned through racing. You’ve seen the Vantage GT3; now this is the next step. Other manufacturers have shown there’s a market for this sort of thing. I don’t want to say that ours is more analogue, but we’re certainly doing it differently.

How similar is the Vulcan to the One-77?

We used the One-77 moulds for the carbon tub, which meant we knew it was extremely rigid and it didn’t need to be strength tested again. We had to modify them to make the engine mountings lower and accommodate the gearbox and roll cage. Beyond that, it’s a case of making sure the whole chassis is in tune with its lighter 1,350kg weight and with around 100bhp more. 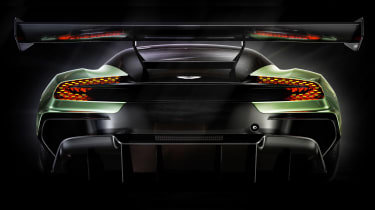 There are similarities with the DB10, but how much does the Vulcan’s design tell us about future Astons?

The DB10 is just for James Bond, but it does have a much lower face, like the Vulcan. Both hint at the future face of Aston Martin, but what we’ll see is that the next DB9 is more gentile and the next V8 Vantage is more aggressive. We want a much wider spread of products. The new DB9 will be tech-led, too. We’ve never invested so much in a new product, and then there’s the technical partnership with Mercedes.

Since Andy Palmer took over as CEO things seem to be moving quickly. Have you ever been this busy?

You’re right, we’re extremely busy. I just had a conversation with Andy and a customer who’s interested in the Vulcan, and I said the thing about Aston is the glass isn’t half empty any more; it’s half full. Andy turned to me and said: “No it’s not, it’s overflowing!” We had a plan in place before Andy, but his strengths are that he’s a guru for product planning. He’s taking the company’s soul and moving it on. 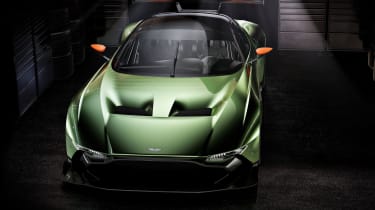 Can you tell us the story behind the interior?

Firstly, it really moves things on. We’ve been hinting at some quite radical Astons for a while now – there was the CC100 concept, a combination of carbon and race-craft, then the mid-engined DP-100 virtual concept added tech into that equation. The Vulcan is a production version of those ideas. On the inside of course we had to cut weight, but all the touch points still feel like jewellery. We’ve worked with Darren Turner to make sure the layout, instruments and ergonomics were all spot on, not just for a pro driver, but amateur drivers who will buy this car, too. It looks like a spaceship that’s just landed. 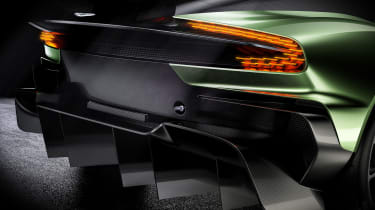 Are you planning to race it?

It’s full FIA-spec, including the aero, so it would qualify for an invitation for some races, like Bathurst. It’s not a full GT3 car, but could be with some relatively simple mods – the clever part of the 7.0-litre V12 engine is it can be down-tuned from 800bhp to 500bhp relatively easily, too.

We know you’re a keen racer. Have you driven it yourself?

No, not yet. The first public debut on track will be at the Le Mans 24 Hours in June. We start testing in six to seven weeks.

Tell us what you think of the new Aston Martin Vulcan in the comments section below...

Welcome to our Geneva Motor Show hub page, scroll down for all our Geneva content...
Mercedes to increase Aston Martin share holding to 20% as part of new deal