Following last year’s renders, the limited-run Aston Martin Valkyrie AMR Pro has been unveiled – but deliveries aren’t due until 2020 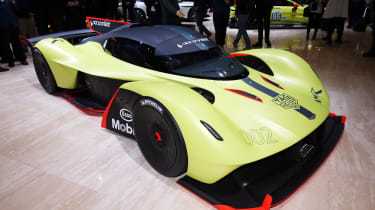 Aston Martin has revealed a lighter and more powerful version of its hardcore Valkyrie hypercar. Only 25 examples of the track-only Aston Martin Valkyrie AMR Pro will be built and all have been snapped up.

Revealed late last year in a series of colourful renders, this is our first look at the car in the metal. It has been revealed at the 2018 Geneva Motor Show by Formula One royalty Chritstian Horner and Adrian Newey, ahead of first deliveries in 2020.

The Valkryie AMR Pro was developed alongside the road-going hypercar and features increased power and torque from its naturally aspirated 6.5-litre Cosworth-built V12 engine. However, while Aston has yet to disclose official figures, bosses suggest it’ll develop “in excess of 1100bhp”. 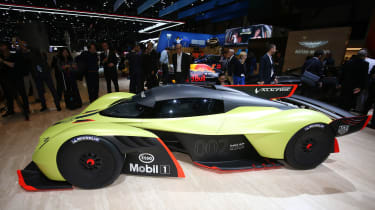 The track-only model will run on slick Michelin racing tyres used on LMP1 cars in the World Endurance Championship. Formula-One inspired carbon brakes have also been fitted to the AMR Pro. It’ll weight just 1,000kg, while its heavily sculpted body has been designed to generate “more than its own weight in downforce”.

Adrian Newey, Red Bull Racing’s Chief Technical Officer, said: “The Aston Martin Valkyrie road car draws extensively from the knowledge I have gained during my career in Formula One, but the AMR Pro version has allowed me to work beyond the constraints of road legality, or indeed practicality.

“I will leave it to the public to ponder the lap time predictions,” he said. “Suffice to say they’re quite impressive.” 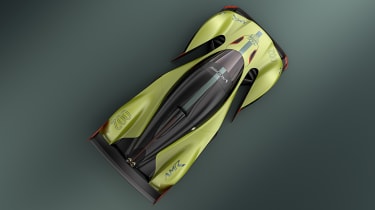 Luxuries featured on the road car, such as the heater and infotainment screens, have been ditched to save weight. The bodywork has been assembled using a lighter weave of carbon fibre, too. A polycarbonate windscreen in place of a glass one helps to further reduce weight, while the exhaust system has also been lightened.

Top speed is said to nudge 225mph, with the car expected to pull forces in excess of 3G during cornering. All owners will be offered an intensive driver development programme to help them make best use of the Valkyrie AMR Pro. The instructors will be provided by Red Bull Racing.

What do you think of the Aston Martin Valkyrie AMR Pro? Let us know below...